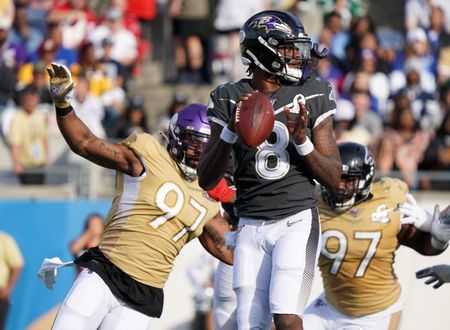 The Ravens and Minnesota Vikings finalized a trade Thursday that sent defensive end Yannick Ngakoue to Baltimore in exchange for two draft picks, the teams announced.

Ngakoue will travel to Baltimore in the next 24 hours to begin his COVID-19 testing and protocols to be ready for the Ravens’ Week 8 game against Pittsburgh, according to ESPN. The Ravens (5-1) are on a bye this week.

“We are excited to add Yannick Ngakoue to our football team,” Ravens general manager Eric DeCosta said in a statement. “Yannick is someone who we are very familiar with going back to the draft process years ago. He is an exciting player and a dangerous pass rusher who makes us better. Yannick grew up here. He’s the type of person we welcome in our building. Finally, we are not finished building this team, as we continue to chase our ultimate goals.”

The Ravens have tried to acquire Ngakoue multiple times in recent months, per the report. Ngakoue grew up in Bowie, Md., and played at Maryland.

Ngakoue started five of the six games he played in Minnesota this season, recording five sacks, 12 tackles and two forced fumbles. However, the Vikings sit in last place in the NFC North at 1-5.

Ngakoue has 42.5 sacks for his career, 12 coming in 2017 when he made the Pro Bowl for the Jaguars. Ngakoue had 37.5 sacks, 14 forced fumbles and two interceptions in 63 games with the Jaguars.

The Jaguars selected Ngakoue in the third round of the 2016 NFL Draft.

The trade reunites Ngakoue with Ravens defensive end Calais Campbell; both started the AFC Championship Game for the Jaguars in 2017.

Ngakoue held out over the summer as he sought a contract extension in the range of $20 million a year. He agreed to a one-year, $12 million deal with the Vikings to complete the trade in August.