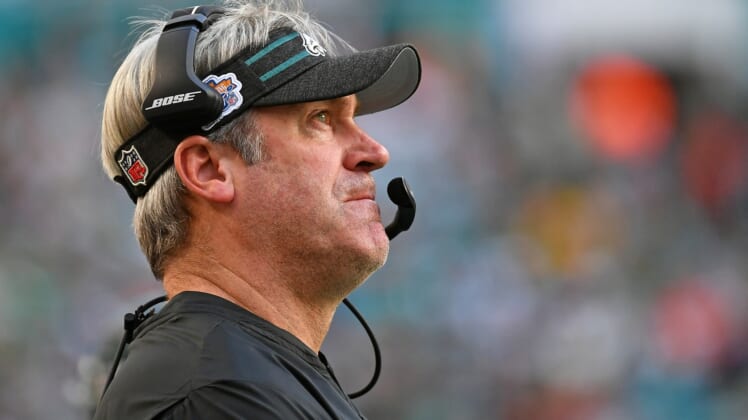 NFL rumors thus far this offseason have focused on the seven head coach vacancies around the league. Most recently, the talk has surrounded what the Philadelphia Eagles plan to do after firing Doug Pederson. Meanwhile, the Houston Texans’ search for a new head coach has been about as drama-filled as it gets.

As the NFL Playoffs move on to the divisional round, these seven teams are going to further evaluate head coach candidates before ultimately coming to a conclusion. That could lead to Pederson heading to Texas after being on the market for a short while.

Could Doug Pederson land with the Texans?

According to Sports Betting, Houston is favored to land Pederson after firing Bill O’Brien early in the 2020 season. Whether this would change disgruntled quarterback Deshaun Watson’s view of the Texans’ organization remains to be seen. But we have in the past seen Pederson work wonders with both Nick Foles and Carson Wentz. Here’s a look at the overall Vegas odds to land Pederson.

It’s clear that odds are favoring Pederson to land with either the Texans or Jets. It must also be noted that the Super Bowl-winning head coach has a built in relationship with New York general manager Joe Douglas dating back to their days together with Philadelphia.

Immediately after firing Pederson, Philadelphia requested permission from the San Francisco 49ers to interview Robert Saleh. While most of the focus has been on the Eagles finding an offensive-minded head coach, their interest makes sense.

Once Saleh interviews with the Eagles, it will be the fifth different team that he has sat down with after leading an injury-plagued 49ers defense to another top-10 finish this past season. Saleh started out as +1500 odds to land in Philadelphia. That has changed dramatically recently.

Odds to become the Eagles’ next head coach

As you can see, Saleh is the only defensive-minded head coach among the top five. Bieniemy (Chiefs), Smith (Titans) and Brady (Panthers) are all NFL offensive coordinators. Meanwhile, Riley is a highly-coveted NFL head coach candidate after the success he’s had with Oklahoma in College.

We’re highly intrigued to see what will come of these seven head coach vacancies. For now, it’s all speculation.

Click here for more NFL rumors and news from Sportsnaut.