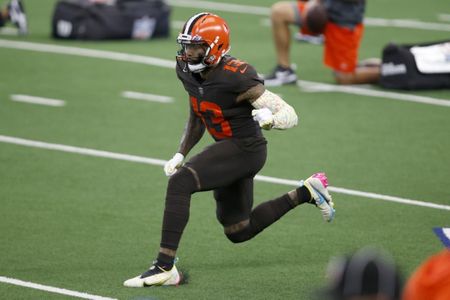 Odell Beckham Jr. caught two touchdown passes and ran for a third that helped stave off a furious Dallas Cowboys comeback in the fourth quarter Sunday as the Cleveland Browns held on for a 49-38 win at AT&T Stadium in Arlington, Texas.

In increasing its record to 3-1 for the first time since 2001 with its third straight victory, Cleveland ran roughshod over Dallas’ leaky defense, piling up 307 rushing yards despite losing leading rusher Nick Chubb (knee injury) in the first quarter.

Beckham accounted for 50 of those yards on the play that kept the Browns from blowing a 41-14 fourth-quarter lead. With 3:25 remaining, Beckham went right on a reverse, skirted a tackle attempt and used some nice downfield blocking to race into the end zone after Dallas (1-3) had closed to 41-38.

Dak Prescott finished with a monstrous stat line thanks to the late rally. The Cowboys’ quarterback completed 41 of 58 passes for 502 yards and four touchdowns. His only mistake was an interception by Denzel Ward at the Cleveland 4 with 1:36 left in the game that sealed the outcome.

Josh Allen passed for 288 yards and two touchdowns and ran for another as Buffalo remained unbeaten by handing Las Vegas its first home loss.

Allen, who completed 24 of 34 passes, left the game briefly late in the second quarter, grabbing at his left shoulder after completing a backhanded, left-handed shovel pass to Stefon Diggs. Diggs caught six passes for 115 yards, and Devin Singletary rushed for 55 yards and a touchdown for Buffalo (4-0).

Derek Carr completed 32 of 44 passes for 311 yards and two touchdowns for Las Vegas (2-2), breaking the franchise record with 151 career touchdown passes. Darren Waller caught nine passes for 88 yards but also had a costly fumble. Josh Jacobs rushed for 48 yards on 15 carries and Daniel Carlson kicked three field goals (54, 39 and 25 yards) for the Raiders.

The Vikings (1-3) needed a last-minute replay reversal to seal the victory, as a 5-yard fourth-down touchdown pass from Deshaun Watson to William Fuller V with 1:15 remaining was ruled incomplete upon review. Thielen (eight receptions for 114 yards and a touchdown) and Jefferson (four catches for 103 yards) teamed with Cook to give the Vikings their first game since 2000 with a 100-yard rusher and two 100-yard receivers. Kirk Cousins passed for 260 yards and a score for the Vikings.

Watson passed for 300 yards and two touchdowns, but the Texans dropped to 0-4 for the third time in franchise history (2005, ’08). Fuller (six catches, 108 yards) and Kenny Stills (two catches, 39 yards) made the touchdown catches.

Russell Wilson threw for 360 yards and two touchdowns and Chris Carson rushed for a pair of 1-yard scores as Seattle remained unbeaten with the victory over host Miami.

Miami’s Ryan Fitzpatrick completed 29 of 45 passes for 315 yards and rushed for a team-high 47 yards, including a 10-yard touchdown scamper with 1:50 left. A two-point conversion pulled the Dolphins within eight points, but Seattle recovered an onside kick and ran out the clock.

Jackson completed 14 of 21 passes for 193 yards and added 53 rushing yards to lead the Ravens (3-1). Andrews caught a 25-yard touchdown in the second quarter and added a 22-yarder in the third for his fourth career multi-touchdown game.

It was the third straight loss for Washington (1-3). Dwayne Haskins Jr. completed 32 of 45 passes for 314 yards, with top target Terry McLaurin hauling in a game-high 10 catches for 118 yards.

Brees passed for 246 yards while completing 19 of 25 attempts for the Saints (2-2). Alvin Kamara rushed for 83 yards and a touchdown and Murray gained 64 rushing yards. New Orleans trailed 14-0 before scoring the next 35 points to take control.

Matthew Stafford threw for 206 yards and three touchdown passes for Detroit (1-3). The Lions were held to 90 rushing yards, with Adrian Peterson leading the way with 36 yards and a touchdown with 3:40 left that pulled Detroit to within six.

Justin Herbert completed 20 of 25 passes for 290 yards and three touchdowns for the Chargers (1-3). He was intercepted once.

Unable to get their offense on track until late, Los Angeles rode its defense to victory over winless New York at SoFi Stadium in Inglewood, Calif.

Let by two-time defensive player of the year Aaron Donald, the Rams (3-1) held the Giants (0-4) out of the end zone while improving to 2-0 at their new $5 billion stadium. The Giants fell to 0-4.

Los Angeles’ high-powered offense finally delivered with just under seven minutes remaining when quarterback Jared Goff hit wide receiver Cooper Kupp on a 55-yard catch-and-run for a touchdown and a 17-9 lead. Goff was 25 of 32 for 200 yards, his lowest passing yardage of the season and his lowest since Week 10 of last season. Giants quarterback Daniel Jones was 23 of 36 for 190 yards, with an interception.

The touchdowns were the first in four games this season for Mixon, who piled up 181 yards from scrimmage (151 rushing, 30 receiving) for Cincinnati (1-2-1). Burrow completed 25 of 36 passes for 300 yards with a touchdown and an interception. Randy Bullock made all four of his field-goal attempts.

Gardner Minshew completed 27 of 40 passes for 351 yards and two touchdowns to D.J. Chark Jr., who had eight receptions for 95 yards. Aldrick Rosas converted 4-of-5 field goals for the Jaguars (1-3), who have lost three in a row.

Teddy Bridgewater threw for two touchdowns and ran for another as Carolina was in control most of the way in the victory over visiting Arizona.

Running backs Mike Davis, who rushed for a game-high 84 yards, and Reggie Bonnafon each posted a touchdown. The Panthers (2-2) won for the second week in a row despite the absence of injured All-Pro running back Christian McCaffrey (ankle sprain).

Arizona quarterback Kyler Murray completed 24 of 31 passes for 133 yards and three touchdowns. His 78 rushing yards also were tops for the Cardinals (2-2), who lost for the second week in a row.

Rivers connected with Mo Alie-Cox for a 13-yard touchdown in the opening quarter, and Blankenship, an undrafted rookie, drilled field goals of 21, 30, 44 and 30 yards. Julian Blackmon added an interception in the fourth quarter for the Colts (3-1).

Nick Foles was 26-for-42 passing for 249 yards, with one touchdown and one interception in his first start for Chicago (3-1). Foles connected with Allen Robinson for a 16-yard touchdown with 1:35 to go before David Montgomery ran for the two-point conversion. The Colts recovered the ensuing onside kick.

Fulgham scored on scored on a 42-yard pass from Carson Wentz to give the Eagles the lead with 5:50 remaining and Singleton returned an interception 30 yards on the 49ers’ ensuing possession.

Wentz threw for one score and ran for another as the Eagles (1-2-1) took over first place in the NFC East. Wentz finished 18 of 28 for 193 yards. Standout tight end George Kittle returned to the 49ers (2-2) after a two-week absence with a knee injury to catch 15 passes for 183 yards.