We see it every year around the NFL. Highly-touted rookies fail to live up to expectations early in their careers. It’s a common theme, and it’s one that causes anxiety within the league’s front offices.

Some of these struggles are primarily due to teams putting youngsters in less-than-stellar situations to succeed as rookies. Simply put, they are asked to do too much too soon.

Quarterback is the one position where this is magnified more than others. There’s so much going on that’s beyond the control of the signal caller.

Does he have the necessary weapons to succeed? How is his offensive line in terms of pass protection? How good are the defenses he’s going to go up against as a rookie?

In this, the expectation has to be that new Los Angeles Rams quarterback Jared Goff will struggle as a rookie. He’s not being put in a position to succeed early on, which is an indictment on the Rams front office.

Goff is among the five rookie we expect to struggle the most this upcoming season. He’s joined by a couple wide receivers selected in the first round and a defensive back that might find himself looking like he’s bobbing for apples in the Big Apple.

Nearly 1/3 of the Rams games this season come against teams with top-10 defenses from a year ago pic.twitter.com/CyOdfN7Ow2

If Goff is indeed tasked with starting out of the gate, he’s going to be facing some stiff competition. As you can see above, nearly one-third of the Rams’ games next season come against teams that fielded top-10 defenses a year ago.

Sure, Goff and the Rams will be taking on hapless pass defenses in the form of the New Orleans Saints and New York Giants (31st and 32nd respectively last season), but that’s the exception to the rule here.

We can also expect Los Angeles to rely a great deal on talented young running back Todd Gurley, which should lessen what it asks from Goff under center.

Unfortunately, this team doesn’t possess the talent on the offensive line or at wide receiver to help Goff progress through what promises to be a rather extensive learning curve.

The team’s top outside receiver, Kenny Britt, hauled in just 50 percent of the 72 passes thrown in his direction.

Some of this will improve with an upgrade under center, but it’s readily apparent Goff doesn’t have the tools to make him successful as a rookie. Look for extensive struggles from the No. 1 overall pick out of the gate.

Whether it’s Robert Griffin III or Josh McCown tossing this rookie the rock in 2016, there’s absolutely no reason to believe Coleman will be worth a hill of beans early in his career.

The biggest issue here outside of Cleveland’s lack of talent at quarterback and other skill positions is Coleman’s own shortcomings.

“Does his best work from outside the numbers, but lacks desired NFL size to play outside. Allows cornerbacks to leverage him against the sideline on deep throws,” NFL Media’s Lance Zierlein opined about Coleman leading up to the draft. “Takes longer than expected to gear down for comeback routes after hitting top speed. Ran limited number of simple routes.”

Being smaller in stature and finding yourself taken advantage of from a physical point of view on the outside isn’t conducive to success in the NFL. If Coleman — as Zierlein points out — is limited to an outside receiver, that’s going to be an issue for him.

Also a problem here is that Cleveland lost its top receiver in Travis Benjamin to the San Diego Chargers in free agency. Outside of that, the team’s top returning pass catcher at receiver is Taylor Gabriel (28 receptions, 241 yards in 2015).

This means that the opposing team will send its top corner to cover Coleman. Again, that’s not putting him in a position to succeed out of the gate.

With the release of Eugene Monroe, Stanley will be tasked with protecting Joe Flacco’s blindside as a rookie. That’s never a good thing to ask of a young offensive tackle, especially one that has struggled in pass protection on tape.

Stanley’s pro-level qualities at this point simply don’t extend much further than the run game — yet another indication that he will struggle in pass protection.

In this, the level of competition Stanley is going up against this upcoming season should also play a major role here.

Five of the Ravens' 16 games this year come against teams with defenses that ranked in the top 10 in sacks last year pic.twitter.com/iPXCtUpv31

Short of Baltimore sending help to the left side, there’s going to be a ton of pressure coming from Flacco’s blind side. This isn’t necessarily a good thing for a quarterback that’s coming off a torn ACL.

Even then, the Ravens sending any extra help to Stanley’s side would create openings for pass interior pass rushers. Again, that’s not conducive to success this upcoming season. 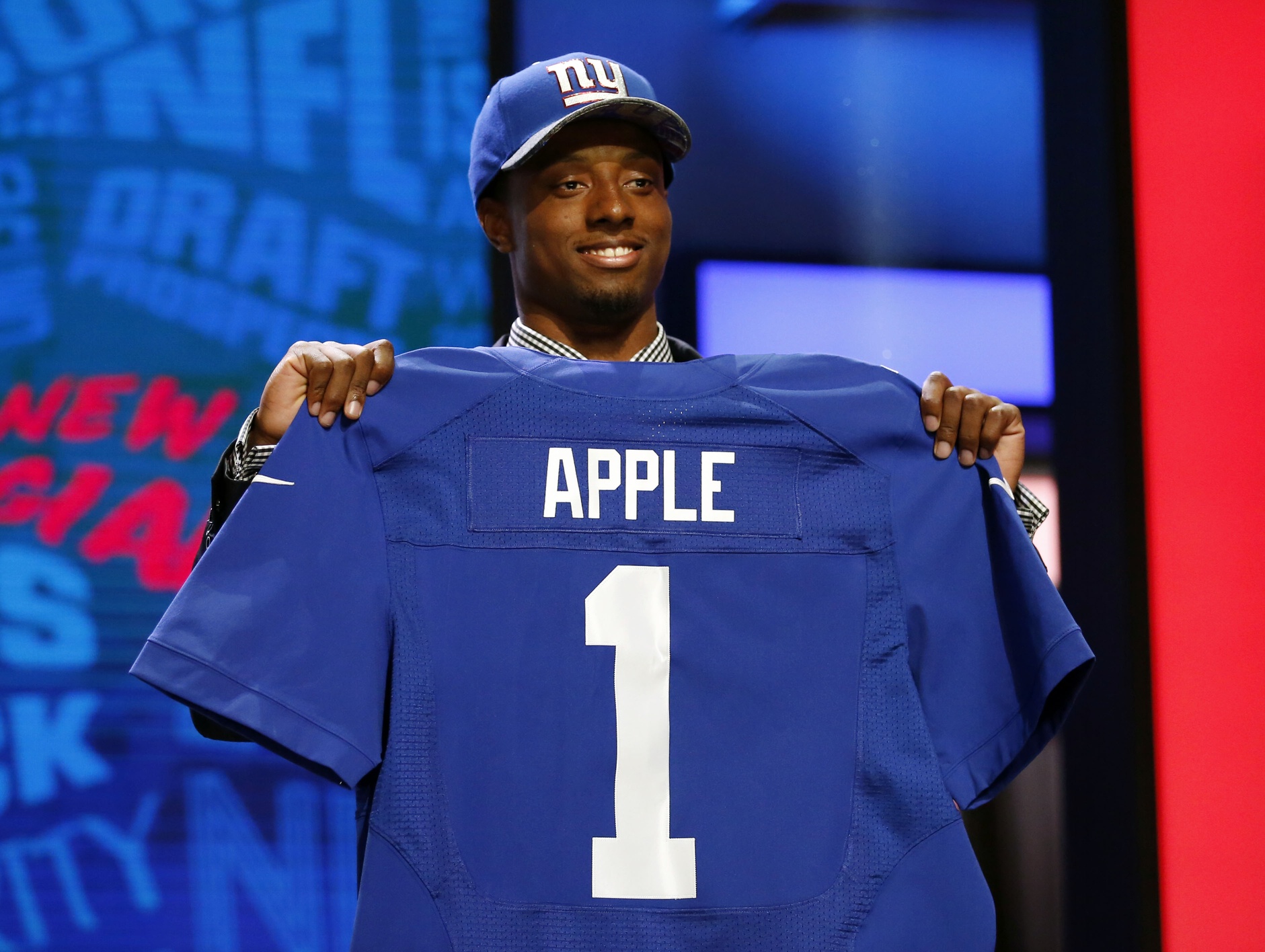 If the Giants are going to rely on this first-round pick to hold down the fort on the outside, they will be sorely disappointed. It’s not that Apple doesn’t possess the natural skill-set to succeed. He boasts one of the highest ceilings of any defensive back in the 2016 draft class.

Instead, it’s all about lack of experience and some major issues with technique. These are two things that could hurt the former Ohio State standout, should he be asked to play a huge role as a rookie.

Apple entered the draft as a red-shirt sophomore after being given an exception by the National Football League. And despite owning two years of starting experience for the Buckeyes, there are issues here.

The 6-foot-1 corner struggles diagnosing what the quarterback is doing early in plays, leaving him vulnerable over the top. Add in slow reactionary skills on the outside, and he’s going to need help on the back end out of the gate.

Unfortunately, the Giants overpaid for corner in Janoris Jenkins in free agency. He’s also vulnerable to being beaten over the top, meaning that help will likely have to be thrown his way.

Without a truly elite cover safety on the roster, the Giants are going to struggle in coverage this upcoming season. Relying on Apple to play a large role would only magnify this further. In fact, the team would be best served by taking it slow with him.

Houston absolutely shocked the football world by taking Fuller 21st overall during the spring. Many had the Notre Dame product pegged as a Day 2 pick, primarily due to his inability to actually catch the football.

That might seem a bit harsh, but drops were a major issue for Fuller during his days with the Irish.

This is largely due to Fuller’s horrible habit of catching the ball with his body. It might not have been a huge deal in college, but with NFL defensive backs hitting the way they do, we can expect the ball to be jarred loose from Fuller all too often until he fixes this bad habit.

It’s also important to note that the Texans now possess a strong-armed quarterback in Brock Osweiler. That’s going to bring Fuller’s issues to the front burner early in his career.

At 6-foot and just 186 pounds, Fuller will also struggle getting off the line against press coverage on the outside. This leads us to believe that he might be best suited to play the slot, something we rarely saw from him in South Bend.