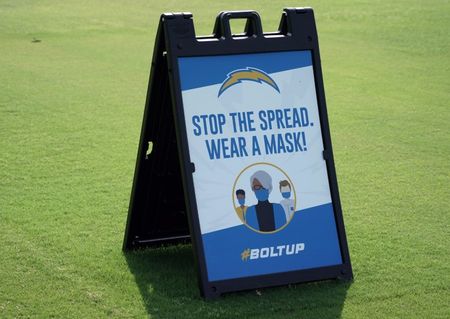 The NFL has fined coaches and teams $1.75 million so far this season for failing to comply with mask requirements aimed at stopping the spread of the coronavirus.

And on Friday, the league sent a memo reminding teams of the rules ahead of Week 3.

“All individuals, except for active players in the bench area, are required to wear face coverings at all times on game day, including on the sidelines and in the coaches’ booth,” said the memo, shared by NFL Network’s Tom Pelissero via social media.

The memo reiterated that the rule applies to all non-playing club personnel and “strongly encouraged” players who didn’t expect to substitute into the game to wear masks.

Pelissero also reported that the NFL is investigating an unnamed team for allowing unauthorized access to the locker room. The NFL’s strict COVID-19 protocols limit the non-players and coaches who can enter the locker room.