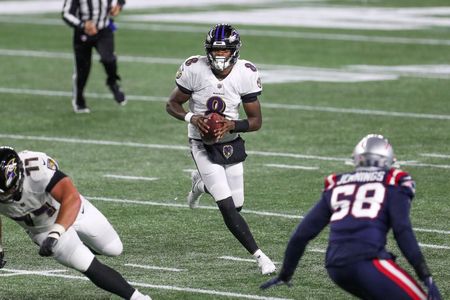 Baltimore Ravens quarterback Lamar Jackson is a few days removed from shocking the NFL world by leading his team back from behind against the Cleveland Browns on “Monday Night Football.”

Despite being the reigning league MVP, this seemed to be a signature moment for Jackson. He had just returned the previous week from a bout with COVID-19 and actually exited the game in the second half with cramps before returning in stunning fashion and leading the Ravens to a much-needed win.

We now have more information on the “injury” Jackson suffered Monday night.

“Probably. Probably because of the body heat and we’re running in the cold. It was so cold out there,” Jackson told reporters on Wednesday, via ESPN’s Jamison Hensley. “That probably had an effect on that as well. I can’t call it.”

One of the unintended consequences of COVID-19. While a huge majority of the population survives the virus, there’s a ton of long-term health issues. As for Lamar Jackson, he tested positive for the virus on Thanksgiving after experiencing flu-like symptoms.

The Ravens previously noted that COVID-19 hit the star quarterback “pretty hard.” Jackson himself said he spent most of his 10 days in quarantine sleeping before returning to the Ravens on Dec. 6.

After struggling earlier in the season, Lamar Jackson has looked pretty good since returning from the above-mentioned illness. He’s tallied six total touchdowns compared to one interception during that span, leading Baltimore to consecutive wins after it had dropped four of five.

Now at 8-5 on the season, Jackson and his Ravens sit as the eighth seed in the NFC. They are in a practical tie with the Miami Dolphins for the final playoff spot, but are currently losing the tiebreaker.

As for the remainder of the regular season, Lamar Jackson and Co. have an easy go at it. They play the Jaguars, Giants and Bengals to close the campaign. Those three teams boast a combined 8-30-1 record.

Click below for more news on Lamar Jackson and the Ravens