Baltimore Ravens: Lamar Jackson quiets critics vs. Browns, at least for one night

Lamar Jackson came through with the Baltimore Ravens' season on the line in Week 14. Is it a sign he's ready to lead the team to the Super Bowl? 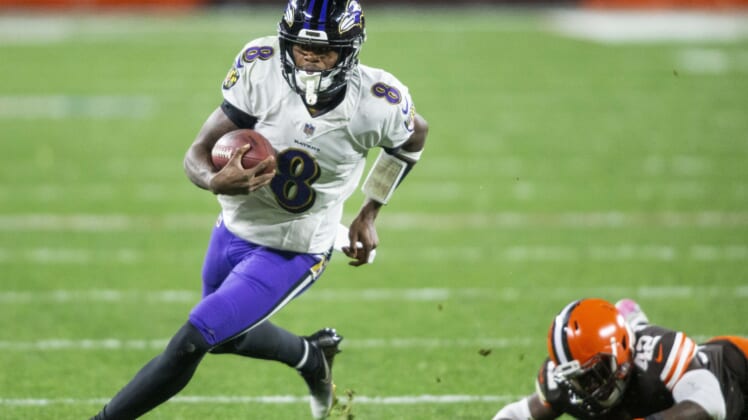 The 2020 season has been full of struggles for Baltimore Ravens quarterback Lamar Jackson, but for one evening at least, he returned to the form that earned him NFL Most Valuable Player honors last year, leading Baltimore to a critical 47-42 road victory over the Cleveland Browns on Monday Night Football.

Jackson not only saved the day for Baltimore with some late-game heroics — he bolstered the Ravens’ playoff hopes while answering some nagging criticisms in the process.

Baltimore’s first-round pick in the 2018 NFL Draft has been a human highlight reel throughout his young pro career, and he flashed plenty of that magic in rushing for 124 yards and a pair of touchdowns to help the Ravens forge a 34-20 lead through three quarters on Monday. The 23-year-old has also been labeled as someone who cannot win the big games, someone who cannot beat an opponent with his passing arm, and as a player who falters when his club needs to come from behind late in the fourth quarter.

For one evening, at least, Jackson muzzled those critics.

Unbeknownst to the game announcers and home viewing audience at least for a while, Jackson had been whisked off to the locker room in the third quarter, to receive treatment for cramps. In his absence, Baker Mayfield led the Browns on a pair of fourth-quarter touchdown drives which vaulted them in front, 35-34, with 6:33 remaining.

Trying to rally behind backup quarterback Trace McSorley, the Ravens marched from their own 21 to the Cleveland 41. As the clock wound towards the two minute warning, however, McSorley slipped trying to make a cut and was left writhing on the turf with an apparent serious knee injury. With no other quarterback dressed for the contest, the Ravens appeared to have lost any hopes for victory, and most likely the postseason.

Then, Jackson put on his Superman cape and reentered the action just in time for a fantastic finish.

Despite already being named league MVP in his second season, Jackson hasn’t had anything made easy for him. Stepping into one of the NFL’s best organizations, he’s had playoff expectations placed upon him from Day 1, expected to be a strong successor to a Super Bowl MVP. Here’s a quick timeline that documents some of the adversity Jackson faced before Monday night’s Week 14 thriller:

On Monday, Lamar Jackson had a different ending in mind. As if on cue, Jackson emerged from the stadium tunnel, raced up the sideline to collect his helmet and ran onto the field to take his place in the Baltimore huddle, as the athletic training staff helped McSorley to the sideline. Jackson did not just return to a critical drive late in the fourth quarter, he returned to face a 4th-and-5 situation.

When play resumed, he took a shotgun snap and rolled right. He appeared to have enough room to run for the first down, but instead had the presence of mind to spot wide receiver Marquise Hollywood Brown who had gotten free behind the Cleveland secondary. On the run, Jackson released a perfect pass that Brown caught in stride before cruising the final 20 yards for a 44-yard touchdown reception. JT Dobbins added a two-point conversion run and Baltimore went back in front, 42-35, with 1:51 to go.

“We had a great play called,” said Jackson after the game. “I dropped back, it looked like they were in man [coverage]…and I was making a scramble to my right, and Marquise just came open. I just had to give him a playable ball, and he just did the rest.”

Mayfield, who passed for 343 yards in the contest, responded quickly – maybe too quickly – for the Browns. Cleveland needed just four plays and 41 seconds to drive 75 yards and tie the game on a 22-yard touchdown pass from Mayfield to Kareem Hunt.

After a touchback, Baltimore started at its own 25, with just 64 ticks remaining in the fourth quarter. Jackson got things started with back-to-back 14-yard completions to tight end Mark Andrews, moving the ball across midfield to the Cleveland 47, with just 38 seconds left. Following a timeout, Jackson connected with wide-out Willie Sneed for six yards and then went back to Andrews for another four, before spiking the ball with seven seconds to play.

That was all the Ravens and kicker Justin Tucker needed. Tucker, the most accurate kicker in NFL history, calmly split the uprights for a 55-yard field goal, giving Baltimore a 45-42 lead.

The Ravens added two more points with a safety on the game’s final play, as Cleveland’s desperation attempt to lateral its way to a score resulted in Jarvis Landry being forced out of the back of the end zone by Marlon Humphrey.

Despite the victory, Baltimore (8-5) is still on the outside looking in on the AFC playoff picture, but it is close. The Ravens are tied with the Miami Dolphins for the seventh and final spot, with the Fins holding the tie-breaker based on a better conference record. However, the Ravens will be heavily favored in each of their final three games. They play the Jacksonville Jaguars, New York Giants and Cincinnati Bengals, who have only eight combined victories. Two of those contests are at home. If the Ravens win out to reach 11-5, they will certainly find a spot among the top seven AFC teams.

Should Baltimore succeed in returning to the postseason, Jackson will have one more opportunity to silence his critics beyond Week 14’s extraordinary effort.