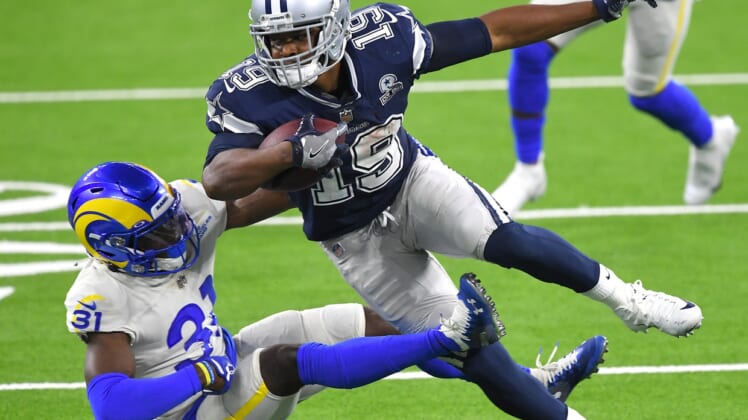 Week 2 of the NFL season is right around the corner and with teams releasing their final injury reporters before Sunday’s games, there is plenty of news that will shape fantasy football lineups.

Heading into another week of NFL action, injuries are piling up on the offensive side. Specifically, top receivers like Amari Cooper, Chris Godwin and Michael Thomas are all dealing with significant issues heading into Week 2. Unfortunately, they are just a few of the stars in jeopardy of being inactive this week.

With the NFL’s Week 2 injury reports coming out, let’s take a look at the latest news around the league.

While the Dallas Cowboys came up short in Week 1, it wasn’t for lack of effort on Cooper’s part. He hauled in 10-of-14 targets for 81 receiving yards, despite being covered by shutdown cornerback Jalen Ramsey. Things looked promising heading into Week 2, until he popped up on the injury report with an ankle injury.

On Friday, head coach Mike McCarthy told reporters that Cooper made it through a mock game and is expected to play on Sunday against the Atlanta Falcons. If Dallas wants to avoid an 0-2 start, it will be crucial to pepper Cooper with targets.

It’s difficult to imagine a better situation for Cooper, as long as he is healthy. Atlanta’s secondary allowed the Seattle Seahawks to score 38 points in Week 1 with 322 receiving yards and four touchdowns through the air.

After facing a top cornerback to open the season, Cooper will draw coverage from rookie cornerback A.J. Terrell in this Week 2 matchup. We could easily be looking at a 100-plus yard, one-touchdown performance for one of the NFL’s top receivers.

New York’s receiving corps has been ravaged by injuries this year and it’s only getting worse. Crowder, who dealt with a tight hamstring in training camp, aggravated the injury this week. Now, per ESPN New York, Sam Darnold’s No. 1 receiver will miss Week 2 against the San Francisco 49ers.

The Jets looked flat in an ugly Week 1 loss to the Buffalo Bills, but Crowder was the lone bright spot. Coming off a 115-yard performance, New York must now find a way to replace the go-to weapon in the passing attack.

Unfortunately, even with Richard Sherman sidelined, the fantasy options aren’t especially appealing. We do like Chris Hernon as a top-10 play at tight end in Week 2, but his upside is limited by this offense and Darnold’s inconsistency. Breshad Perriman is a bargain option in DFS, but fantasy owners shouldn’t take the gamble in season-long leagues.

When the New Orleans Saints diagnosed Thomas with a high-ankle sprain, playing on Monday Night Football against the Las Vegas Raiders immediately seemed impossible. Of greater concern, there was a real possibility the Saints might have placed their All-Pro receiver on injured reserve for three weeks.

Per NFL Network’s Ian Rapoport, Thomas will miss the team’s MNF battle against Las Vegas. After being unable to practice this week, the decision to rule him out on Saturday became obvious. With the All-Pro receiver sidelined, New Orleans will be counting on others to thrive in larger roles.

Now that Thomas is officially out for Week 2, fantasy owners can remove him from their lineup and examine other options. While it is impossible to replicate his production, the vacant spot at wide receiver could be filled by one of Thomas’ teammates. Of course, fantasy managers must also consider the ripple effects of this injury.

Emmanuel Sanders will step in as the go-to receiver in this offense and that squarely puts him on the fantasy radar for Week 2. He should draw seven-plus targets from Drew Brees and that gives him a shot at a very productive day, with the upside of 70-plus yards and a score.

Furthermore, this news is a boost for Jared Cook and Alvin Kamara. New Orleans will look t get Cook more involved, especially after his strong outing in Week 1. While the Raiders improved their defense this offseason, Cook is still a top-five play at tight end in Week 2. Meanwhile, Kamara should see 20-plus touches on Monday and that locks him in as a top-five running back.

Not only did the Tampa Bay Buccaneers come out of Week 1 with a loss, but they also had concerns for Chris Godwin’s availability for Week 2. The All-Pro receiver took a blow near his head in the fourth quarter and was placed in the concussion protocol this week.

While Godwin was spotted at the team’s facility on Friday and is progressing, he will not play on Sunday. Instead, the Buccaneers will lean on a deep cast of other pass-catching weapons against the Carolina Panthers.

Carolina’s secondary allowed 34 points to the Las Vegas Raiders in Week 1, getting roasted by an inexperienced receiving corps. That spells trouble in Week 2 against Mike Evans, who is improving after playing through a hamstring injury last Sunday.

Evans is a top-10 fantasy receiver for Week 2 and offers the upside to finish top-five in production on Sunday. He’s not the only one who will benefit if Godwin is sidelined. Scotty Miller, who caught five passes for 73 yards in Week 1, is quickly becoming a favorite of Tom Brady. If Godwin is inactive, Miller becomes a great DFS play and could be a solid FLEX option in season-long leagues.

After already missing Week 1 with a hamstring injury, it doesn’t loom promising for Golladay heading into Week 2. He missed practice Wednesday and Thursday, adding to the doubt surrounding his availability.

Before Friday’s practice, Matt Patricia indicated Golladay would be very limited in the team’s final preparation for Week 2. Heading into a critical matchup against the Green Bay Packers, Golladay will be sidelined once again.

In most weeks, Marvin Jones Jr. would be a top-25 option by stepping in as Matthew Stafford’s No. 1 receiver. Unfortunately, this is not a favorable draw for the veteran receiver, despite his talents.

Green Bay will likely put cornerback Jaire Alexander, who is emerging as an elite player, on Jones. As a result, that greatly limits the 30-year-old’s upside. When Jones faced Alexander in 2019, he was held to 17 receiving yards on only two catches.

Instead, fantasy owners should turn their focus to receiver Danny Amendola and tight end T.J. Hockenson. Amendola finished with 81 receiving yards in Week 1 and is a safe bet for at least five catches and 50 receiving yards. Meanwhile, Hockenson is a top-12 play at tight end this week.

After suffering a knee strain in Week 1 against the Arizona Cardinals, Kittle managed to return and seemed positive he could fight through the pain moving forward. However, after missing an entire week of practice, the 49ers are taking a cautious approach with their most important offensive weapon.

San Francisco ruled Kittle out for Week 2 against the New York Jets, an understandable decision given the game should be winnable without him. After spending a week rehabilitating the injury, the team will hope that the All-Pro tight end can return to action in Week 3 against the New York Giants.