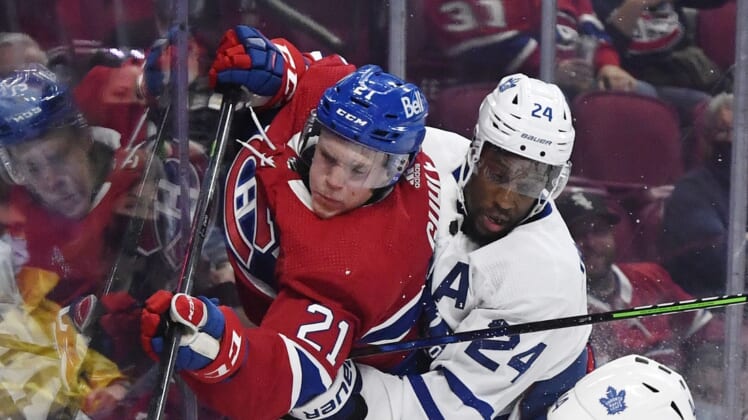 The Toronto Maple Leafs have some important games coming up, but they cannot afford to look past Saturday night when they visit the last-place Montreal Canadiens.

Under interim coach Martin St. Louis, the Canadiens are believing in themselves and the results show it. After Thursday’s 4-3 home loss to the Eastern Conference-leading Florida Panthers, Montreal is 9-4-3 since Feb. 17.

“I think we showed we can play with any team in the league,” Canadiens defenseman Joel Edmundson said. “A couple of months ago, we couldn’t do that. Right now, the way we’re playing, we can give any team a run for its money.”

The Maple Leafs learned that on Feb. 21 when they lost 5-2 in Montreal. The teams have split two games this season.

“There is trust,” said Montreal forward Paul Byron, who scored Thursday. “It makes a big difference. We know we can win every night. Our style of play is really better than before. … We are not as bad as at the start of the season. There are good players, good young people. Cole (Caufield) and Nick (Suzuki) have so much potential.

“There is a good group. We can forget the past and focus on the future. We must forget the dark months of November, December and January.”

The Maple Leafs, who play Florida and the Boston Bruins next, have made some changes since they last played the Canadiens.

Rookie goaltender Erik Kallgren has had an impact recently and will start against Montreal.

Defenseman Mark Giordano and forward Colin Blackwell were obtained in a trade with the Seattle Kraken on Sunday.

Giordano and Blackwell made their Toronto debuts Wednesday in a 3-2 victory over the visiting New Jersey Devils.

Teamed mostly with Timothy Liljegren and having some power-play duty, Giordano logged 18:35 in ice time. Blackwell recorded 8:21 playing on the fourth line and also having some brief shifts on the power play and in a penalty-killing role.

Giordano was obtained to give the defense a needed boost and he did.

“When he was out there, and the puck was on his stick, things seemed to settle down and you could just tell he’s a veteran,” Maple Leafs coach Sheldon Keefe said. “He knows how to play. Despite coming in (to) new teammates, new city, new system, all those kinds of things, he’s just confident and moving pucks, defending, getting in people’s way so I really liked his play.”

Auston Matthews assisted on Marner’s goal to match his career high with 80 points (46 goals, 34 assists). With 19 games remaining, Matthews is one away from matching his career high in goals, and two from his career-high in assists.

In an encouraging development Wednesday, veteran goaltender Petr Mrazek had a decent game, stopping 20 shots. He had struggled mightily for nearly a month (allowing 20 goals in five games) and was put on waivers, which he cleared Monday.

Mrazek is scheduled to start Sunday when Toronto hosts Florida.