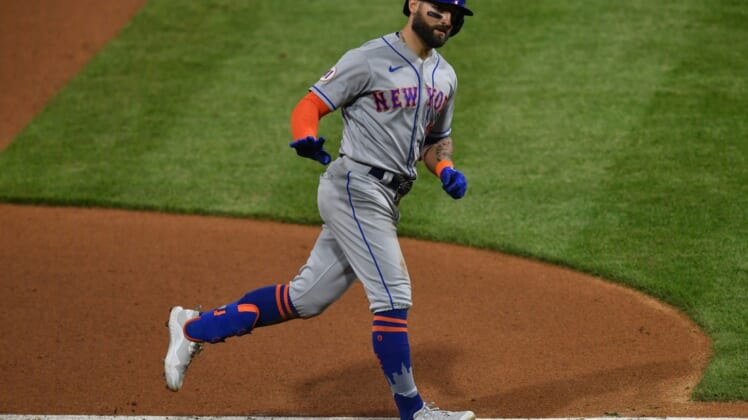 Kevin Pillar had three hits, including a solo home run, to rally the New York Mets past the host Philadelphia Phillies 8-7 on Sunday.

Pete Alonso doubled and drove in three runs as the Mets scored six times in the eighth to post the comeback victory. Jeff McNeil added four hits and Michael Conforto had three hits. Dominic Smith doubled twice and Jonathan Villar also contributed two hits for the Mets, who won two of three in this series.

Jacob Barnes (1-0) earned the win in relief and Jeurys Familia earned his first save after striking out Bryce Harper to end the game.

Brandon Nimmo (finger) and J.D. Davis (hand) were both held out of the Mets’ starting lineup, though Nimmo did enter as a late game defensive replacement. But the Mets still managed to compile a season-high 17 hits.

Phillies starter Zach Eflin gave up 10 hits and two runs in six innings. He struck out seven and walked none.

The Phillies jumped out to a 1-0 lead in the first inning when McCutchen crushed a leadoff home run to center field.

Gregorius launched a three-run home run in the bottom of the sixth off Miguel Castro for a 4-2 Philadelphia lead.

The Mets went ahead 5-4 in the eighth, highlighted by a home run by Pillar. Jose Peraza added a pinch-hit RBI single and Conforto drew a bases loaded walk against Jose Alvarado. Alonso then came through with a three-run double against David Hale for an 8-4 lead.

Quinn hit an RBI triple in the ninth to close the Phillies within 8-5. Hoskins appeared to tie the game at 8 on a three-run homer off Edwin Diaz, but after a review, it was determined to be a double off the top of the wall.