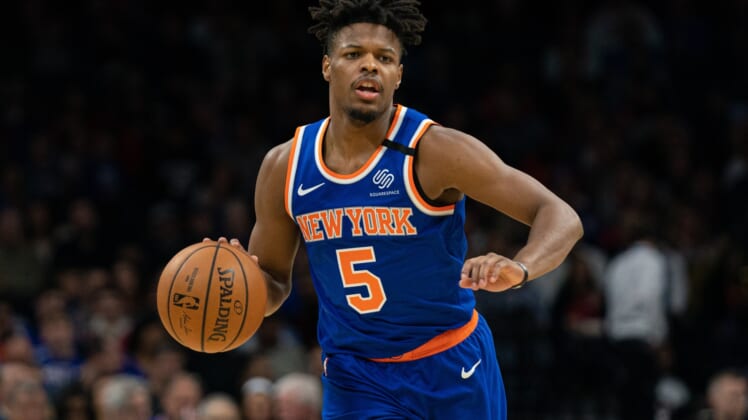 New York Knicks rumors: The New York Knicks are going to be the subject of rumors on a near never-ending basis throughout the NBA season following the hiring of former player-agent Leon Rose as the team’s president.

Fresh off yet another losing season (21-45), the long-downtrodden Knicks are obviously in need of building their talent level up, once again. The issue here is an organization in New York that has lost prestige. That was magnified during free agency ahead of the 2019-20 season.

Even now that this year’s free agency has quieted down around the NBA world, we’re hearing a lot of rumors surrounding the New York Knicks. Continue reading for more on the latest buzz out of the Big Apple.

According to Marc Berman of the New York Post, the first couple of Knicks preseason games aren’t boding well for the perception around the NBA that Smith can live up to his promise as a former lottery draft pick.

One NBA scout said to Berman, “Dennis Smith does not see the floor. He’s probably not a true point guard.” The scout added, “Dennis just looks awful as a player and teammate. He has zero feel. You question his vision.”

In other words, Smith’s chances of a fresh start with a better team are dwindling, as is the view he’d be a viable piece in a blockbuster deal New York could swing for an All-Star. Given the fact that the Knicks have struck out in free agency time and again in recent years, it seems like their only chances of landing a so-called big fish is through a trade, or nailing a high draft pick. Neither of those have come to fruition.

The ability to swing a trade while still retaining rookie Obi Toppin and R.J. Barrett is key, yet New York has a very limited number of assets. Smith is going to need to show signs of improvement quickly. If anyone can get it out of Smith, new Knicks coach Tom Thibodeau, known for his tough-loving style and high standard particularly on defense, could be the one to unlock the 23-year-old’s potential.

A recent report from Newsday veteran reporter Steve Popper cites scuttlebutt around the NBA that suggests Ntilikina could be on the move in the midst of the final season on his rookie contract.

“In terms of the fans, [Ntilikina] is one of the most divisive members of the team,” Popper writes. “However, scouts and executives around the league remain interested in Ntilikina, at least at a low cost.”

That last part is the key kicker. Although the Knicks still have until July 31 to make Ntilikina a qualifying offer as a restricted free agent, it may never get to that point in New York. Right now, the 23-year-old guard is a defensive specialist with upside. The question is whether the Big Apple is where he’ll realize his full potential.

The arrival of new head coach Tom Thibodeau seems to bode well for Ntilikina, given that Thibodeau puts a massive emphasis on defense, and the former lottery draft pick has to be the best on-ball perimeter defender the Knicks have right now.

But if Thibodeau’s system helps the other players buy in and renders Ntilikina’s skill set more obsolete, it’s possible New York could use him as an asset in a blockbuster trade, or try to get at least some return for him. Otherwise, if the Knicks don’t extend that qualifying offer next offseason, Ntilikina will hit unrestricted free agency, and the team wouldn’t get any compensation for him in return.

Knicks president Leon Rose might not have made the big splash he anticipated in his first offseason with the team. However, New York is now much deeper than we’ve seen in the past. After adding the likes of Alec Burks, Nerlens Noel and Ed Davis, among others, through various means, the Knicks are back at it.

According to ESPN’s Adrian Wojnarowski, New York has signed veteran guard Austin Rivers, formerly of the Houston Rockets. Rivers, 28, opted out of his contract last week. He was among those upset with the new direction of the Rockets following the departures of head coach Mike D’Antoni and general manager Daryl Morey.

If nothing else, Rivers can provide depth at the two-three spots behind current starters R.J. Barrett and Kevin Knox. A former first-round pick of the then-New Orleans Hornets back in 2012, Rivers averaged 8.8 points and shot 36% from distance for Houston last season.

Gordon Hayward officially exercised the opt-out clause in his contract with the Boston Celtics, turning down $34 million to become a free agent. While a return to Boston isn’t out of the question, New York is making Hayward its top priority.

According to The New York Times‘ Marc Stein, the Knicks intend to aggressively pursue Hayward in free agency. Many teams around the NBA believe it is also the best fit for him, given New York created $40 million in cap space on Thursday. With free agency set to begin on Friday, the Knicks could strike early with an All-Star addition.

After selecting Obi Toppin with the No. 8 pick, the New York Knicks made even more changes to their frontcourt on Thursday. Shortly after declining options on Bobby Portis and Taj Gibson, New York is acquiring power forward Ed Davis.

The deal, first reported by The Athletic’s Tony Jones, sends Davis and two 2023 second-round picks to the Knicks. It’s a cap-saving move for Utah, who offloads the $5 million that Davis is owed for the 2020-’21 season.

Davis saw very little playing time in Utah this past season. He averaged 1.8 points and 3.8 rebounds per game, finishing around 11 minutes per night. He’ll provide some depth for New York at power forward, but a lot of minutes will be given to Topin.

New York Knicks rumors: Team in talks to acquire No. 2 pick from Warriors

This would be something else. Rumors have suggested that Golden State is indeed looking to move out of the second spot. It has had conversations with a number of teams about the selection.

Picking No. 8 and No. 23 in the first round of Wednesday’s NBA Draft, the Knicks would have to offer up a whole lot more than those two selections to entice Golden State. Could 2019 lottery pick R.J. Barrett be used as fodder? The Warriors also have the $17-plus million Andre Iguodala trade exception. They could take on Julius Randle’s contract while adding the 23rd pick and a future first-round pick from New York.

As it relates to the Knicks, LaMelo Ball would seem to be the likeliest target for new president Leon Rose. He has been linked to New York for some time now. Stay tuned!

At this point, injury Boston Celtics forward Gordon Hayward is expected to opt into the final year of his contract. His base salary for next season is $31.49 million. There’s very little reason to believe that Hayward would come close to meeting that in free agency.

It has led to rumors that the Celtics will ultimately trade Hayward once he officially opts in. If so, the New York Knicks are a viable potential landing spot. Kevin O’Connor of The Ringer reports that New York will have interest in Hayward should Boston put him on the block.

New Knicks president Leon Rose is looking to make a splash. Whether Hayward would qualify as that remains to be seen. The 30-year-old Hayward has not been the same since suffering a serious leg injury in his first game as a member of the Celtics back in 2017-18. However, the former All-Star did average 17.5 points, 6.7 rebounds and 4.1 assists on 50% shooting from the field this past season.

Any move to acquire Hayward would likely include the Knicks sending the contracts of Julius Randle and Taj Gibson, among others, to Boston. It would work out from a depth perspective for the Celtics. Expect Knicks rumors to pick up on this front moving forward.

According to the New York Times’ Marc Stein, New York is on the shortlist of viable trade destinations for Russell Westbrook.

Since reports emerged of Westbrook’s desire to leave Houston, interest in acquiring him has been sparse. While he is undeniably talented, the 32-year-old is in decline and will be owed more than $130 million over the next three seasons.

He suffered a quad injury in the NBA bubble, which limited his explosiveness on the court and highlighted the risks of the years to come. Speed is an essential element of his game and it is slowly slipping away. However, he still averaged 27.2 points, 7.9 rebounds and seven assists per game this past season.

A change of scenery would certainly benefit him. Westbrook loves operating as the star on the court, handling the ball and dictating the flow of the game. It’s something he missed out on this past season, playing alongside James Harden.

The Knicks have the assets to pull off a blockbuster trade and we know how desperately they want a star. Ultimately, if Westbrook wants out and New York is willing to eat his contract, a trade to the Knicks is very possible.

“The teams were not specified, though one source said there are two Eastern Conference teams and one from the West who are interested in sign-and-trade scenarios involving Bertans. That is along with at least three teams – the Hawks, Knicks and Suns included – expected to target Bertans early in free agency using their cap room,” Chase Hughes of NBC Sport Washington reported.

There’s been a lot of rumors that Bertans, an impending unrestricted free agent, will decide to depart the Washington Wizards. That was magnified when the power forward opted out of the remainder of the 2019-20 NBA season in Orlando.

Bertans, 27, averaged 15.4 points and 4.5 rebounds on a resounding 42% shooting from three-point range this past season. He’s seen as one of the top free agents set to hit the open market.

Unlike some other teams looking to chase after the former Indiana Pacers second-round pick, the New York Knicks figure to have the cap room to add him to the mix. He’s likely looking at north of $15 million annually on a long-term deal. However, that’s pure speculation on our part given the economic situation around the NBA world.

There’s definitely a chance that New York opts to go the sign-and-trade route. The Knicks wouldn’t part with their initial first-round selection (eighth overall) in the 2020 NBA Draft for Bertans. However, the 27th pick a long with someone like Kevin Knox and a salary filler in Taj Gibson could make sense for both New York and Washington. Again, that’s pure speculation.

Related: 5 Top Signature Basketball Shoes Perfect For A Sneakerhead Collector On A Budget.

Other rumors around the NBA water cooler suggest that the Knicks, led by Mr. Rose, will be looking to make an even larger splash during the offseason. That could include acquiring Paul from the Oklahoma City Thunder in a trade. ESPN personality and former NBA player Kendrick Perkins backed this claim up recently.

On the surface, acquiring the 35-year-old Paul and his bloated contract might not make sense for a contending team. With that said, New York wants to throw out an entertaining product in the Big Apple. Adding Paul to the mix makes sense in that regard. It’s why rumors around the NBA water cooler have picked up surrounding Paul going to the Knicks.