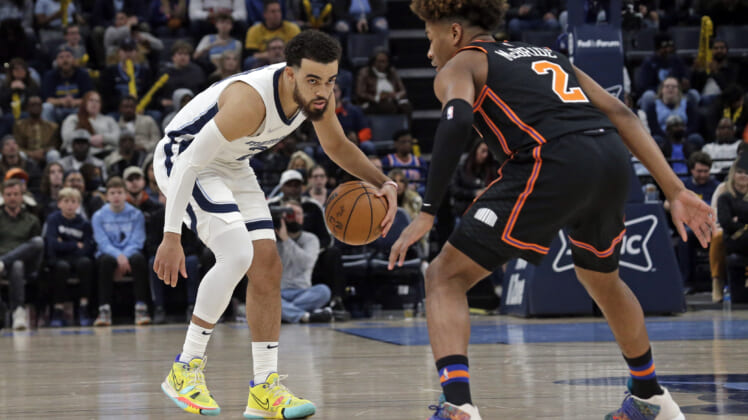 The New York Knicks want to leave the NBA offseason with a star added to their lineup after a disappointing 2021-’22 NBA season. If they fall short of landing Damian Lillard or Donovan Mitchell, there could be an unheralded player squarely on the team’s radar.

While New York desires a superstar to attract fans to Madison Square Garden, cap space is a problem. If Lillard and Mitchell aren’t made available by their teams, the Knicks have to depend on free agency to fill their need for a guard.

Jalen Brunson stands out as a potential solution. While the 25-year-old guard has experienced some scoring volatility during the playoff series against the Phoenix Suns, he is viewed as a player on the rise. If the Dallas Mavericks find a way to keep him, New York needs to pivot.

According to Marc Berman of the New York Post, Tyus Jones is a name to keep an eye on as someone the Knicks are intrigued by this summer.

Jones, a 6-foot point guard, has made an impact for the Memphis Grizzlies despite playing in a limited role. While he averaged just 21.2 minutes per game this season, he proved to be quite effective in multiple roles for the Grizzlies.

There’s another factor at play here, one the Knicks are plenty familiar with to this point. Tom Thibodeau coached Jones with the Minnesota Timberwolves from 2016-’19, overseeing the young guard’s development.

During the 2021-’22 regular season, Jones shot 39% from beyond the perimeter and hit 45.1% of his attempts from the field. In terms of his defensive impact, the 26-year-old posted a 112 Defensive Rating for the third consecutive year.

Related: 4 New York Knicks offseason moves that should be made

While a number of teams will likely be interested in Jones, the opportunity to reunite with Thibodeaux and play for the Knicks could be appealing. Of course, Jones isn’t the caliber of player New York needs to really improve next season.