With a projected $50 million in cap room, the New York Knicks are going to be extremely active once NBA free agency opens up next month.

New York is coming off a surprising playoff appearance and promises to be aggressive under front office head Leon Rose.

Could that potentially include stealing star guard and restricted free agent Duncan Robinson from the conference-rival Miami Heat? Ian Begley of SNY notes that there’s interest from New York’s front office in Robinson.

“The interesting thing with (Kendrick) Nunn and Duncan Robinson is that Miami will be forced to make a difficult decision if both players sign big offer sheets. The Heat can – and probably would – match offers to Dunn and Robinson. But bringing both players back on big contracts could hamper Miami’s future flexibility,” Begley reported. “Robinson will probably have plenty of suitors this summer. This isn’t surprising, but Robinson has fans within the New York Knicks organization.”

The expectation is that Robinson, 27, is going to have a ton of suitors on the restricted free-agent market. A former undrafted free agent out of Michigan, he’s turned into one of the best perimeter shooters in the game.

Since the start of the 2019-20 campaign, Robinson is averaging 13.3 points on 43% shooting from distance. This past season saw him elevate his game beyond simply being a stationary three-point shooter. 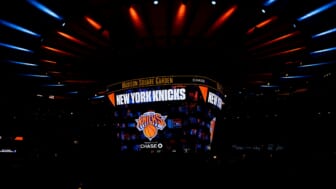 As for the Knicks, they are in a much better position than other teams to simply sign Robinson outright. As stated above, they are expected to have the most cap room in the Association. This means New York wouldn’t have to engage the Heat in sign-and-trade scenarios if its brass is actually sold on Robinson being a key component for a championship contender down the road.

How might Duncan Robinson to the New York Knicks work?

The other option here is that it becomes clear Robinson will be headed to the Big Apple on a big-time free-agent deal.

Likely to decline the options on Andre Iguodala and Goran Dragic, Miami could have as much as $20 million to spend under the cap. Would that be enough to match any offer to Robinson? It really depends on the veteran’s market.

If not, a sign-and-trade between the two Eastern Conference playoff teams from a season ago could be mutually beneficial.

This would include New York giving up one of its two first-round picks in the 2021 NBA Draft (19th and 21st) overall to Miami in order for the Heat to take back a contract. Perhaps, Kevin Knox’s $5.8 million salary would head to South Beach. In turn, the Heat add more assets to potentially acquire another star player while New York saves enough cash to sign a max-level free agent on the open market.

Either way, the New York Knicks are going to be one of the stories to watch when the NBA offseason really gets going. Duncan Robinson is also going to be among the most-coveted free agents. This certainly warrants our attention moving forward. That’s especially true if New York somehow finds a way to pull off another blockbuster trade ahead of the NBA Draft.