Duncan Robinson has been one of Miami's best players since the trade deadline and it's notable. Here's why Robinson is a key piece for Miami moving forward. 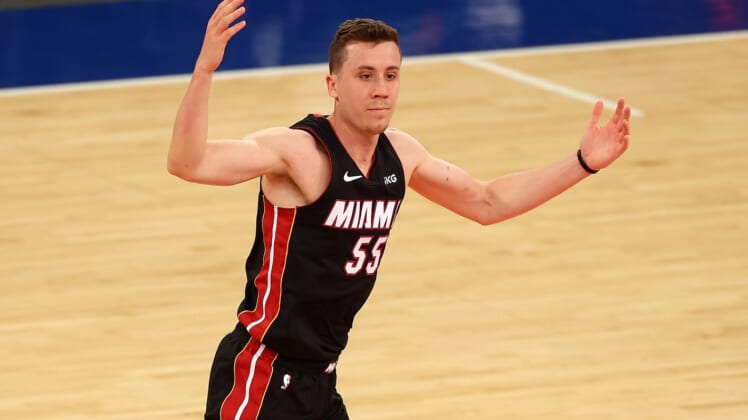 Duncan Robinson made history on Saturday night against the Cleveland Cavaliers when he became the fastest player in NBA history to make 500 three-pointers. Faster than Stephen Curry, Klay Thompson, and Damian Lilliard, who are some of the greatest shooters we have in the game today.

Robinson has been extremely hot since the trade deadline passed and that shouldn’t be a surprise due to the rumors that were flying around about him during that time. The team has benefited greatly from his play, both on the offensive and defensive end of the floor.

With the postseason around the corner, Robinson is set to start in his second straight NBA playoffs in his third year. However, the narrative surrounding the 27-year-old sharpshooter should change from being “just a shooter.”

Duncan Robinson is more than a shooter

Robinson’s defense last year wasn’t anything to brag about and while the statistics may not show that he is an amazing defender, it’s easy to tell by the eye-test that it’s better. Plus, some hustle stats show the type of effort Robinson puts forth every single night.

WATCH: Duncan Robinson drills seven threes in one half

Robinson is tied for 15th in the NBA for most drawn charges this season. Victor Oladipo is the only other player on the Miami Heat who has kept up with him with 12 charges of his own too, but he has spent a majority of the season with the Houston Rockets and Indiana Pacers.

The Michigan product is one of the better hustle players on the Heat. Robinson ranks third on the team in most loose balls recovered behind Jimmy Butler and Bam Adebayo. Some notable names to be alongside when you’re talking about statistics other than shooting.

The Heat have benefited greatly off of Robinson’s effort and it’s understandable why Miami held onto him when they could’ve relented and traded for Butler’s best friend Kyle Lowry at the trade deadline.

Duncan Robinson’s improvement has been notable

Duncan Robinson’s improvement has been notable this season, even if he has “regressed” from shooting 44.6% to 40.7% from the three-point line since last year. Robinson is attempting fewer shots from beyond the arc than he was last season.

The numbers highlight what was clear from watching him. It’s still a high percentage of shots, but it’s slightly more balanced across all areas with the biggest increase coming from 0-3 feet.

One of the many reasons this has increased is due to Robinson being more willing to attack the basket, pull up for a mid-range jumper, or attempt floaters in the lane. Even though he missed the shot, the following example shows the type of player Robinson could become if he can do this consistently.

Even though Robinson missed that layup, he still ran back on defense instead of being upset about it and not hustling back. His game is starting to expand and it’s certainly heading in the right direction.

There is more Robinson can improve on and it’s clear he can get astronomically better if he puts everything together.

Robinson has been one of the key pieces to this team and it needs to continue going into next season and beyond. Robinson has shown that he is more than a shooter and there is more to unlock with his potential.

Miami hasn’t paid shooters like him often, but he would be worth every single dollar if he continues to improve. Robinson is starting to develop more on the offensive and defensive ends of the floor and has shown that he doesn’t need to rely on dribble handoffs to get shots up.

Many wanted him moved before the deadline because he was struggling, but it’s impossible for a player to ignore when their name is being floated around in trade rumors constantly.

If the Heat want to maximize their potential as a team this year and beyond, Duncan Robinson needs to be on the team. He fits perfectly with Jimmy Butler and Bam Adebayo, and if he can fit with Adebayo specifically, he should remain in Miami.

The Heat have been linked to Kyle Lowry and some reporters think that Lowry is going to come to Miami this offseason. Lowry is the godfather to Butler’s daughter and the two have a very close relationship.

However, Robinson needs to be the priority over players such as Goran Dragic, Victor Oladipo, and others. The Heat shouldn’t give him up to another team just to bring in someone like DeMar DeRozan to play with Lowry.

Duncan Robinson is a part of Miami’s future going forward and the fit is perfect for both sides. He loves playing in Miami and the organization should pay him handsomely this summer.