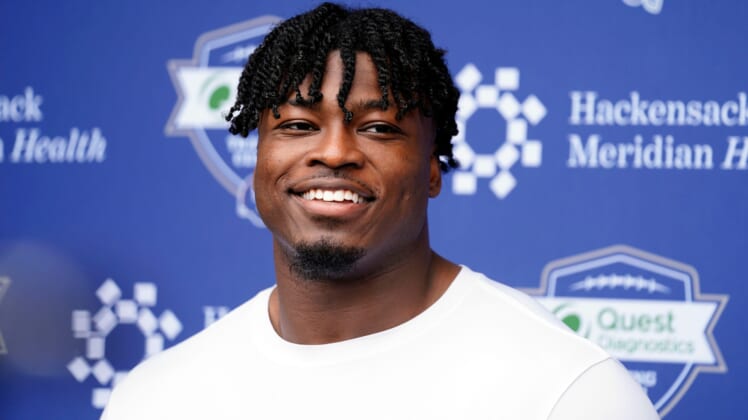 The New York Giants were back on the practice field on Sunday after having two days off following their 23-21 victory over the New England Patriots on Thursday.

This was the last practice that was open to the fans, and head coach Brian Daboll spoke about what it meant to have fans attend practice.

Before practice, Daboll also spoke with the media regarding the rash of injuries the team is dealing with. He stated the starting left guard Shane Lemieux, who suffered a foot injury against the Patriots, would probably not practice this week.

Daboll also wouldn’t commit if Lemieux would be ready by New York’s season opener against the Tennessee Titans on September 11th.

In addition to Lemieux, the Giants were also without the services of offensive linemen Joshua Ezeudu and Jamil Douglas, as well as receiver Kadarius Toney who will likely be out for the week. Leonard Williams participated in induvial drills but did not participate in practice.

However, all was not bad for New York on the injury front, as Azeez Ojulari was able to practice for the first time this summer. It’s unknown at this time if he’ll play on Sunday against the Cincinnati Bengals.

As far as practice went, it was another dominant performance by the defense who was a step ahead of the offense all morning.

Daniel Jones completed just 6 out of 20 passes in 11 on 11 drills and was intercepted by Adoree’ Jackson off a tipped pass intended for Richie James.

Defensive coordinator Wink Martindale dialed up the blitz often throughout the duration of practice. Even some of the passes Jones was able to complete would have resulted in a sack if this were a live game.

Even a flea-flicker went incomplete as the defense was ready for anything the offense threw their way.

It’s common in training camp for defenses to be ahead of offenses at this point in the summer, especially with the Giants implementing a new offense. But as we get closer to the season opener, you would like to see New York’s passing offense have some sustained success. We’ll see.

Saquon Barkley’s back + other news & notes

The one bright spot with New York’s offense on Sunday was Saquon Barkley who continues to look sensational. The quick burst that was missing last season has been evident all summer long. He’s cutting smoothly and running with power again.

After having a rough outing against the Patriots, cornerback Aaron Robinson had a solid practice. He was in tight coverage all morning, including breaking up a pass that was intended for Kenny Golladay in the end zone.

Thanks to their impressive performance on Thursday, linebackers Darrian Beavers and Austin Calitro took some reps with the first team defense on Sunday. Expect both Beavers and Calitro to see extensive action against the Bengals on Sunday as the coaching staff tries to determine just how valuable these two can be.

On the offensive side of the ball, receivers Collin Johnson, C.J.Board, and Richie James all took reps on Sunday with the first-team offense as they continue to make their case for making the final roster.

In regards to special teams, Board, Darnay Holmes, Darius Slayton, and Gary Brightwell took turns fielding kickoffs. We should have more insight when they play the Bengals on who has the inside track towards being the team’s returner.

New York will be back on the practice field on Monday for another two-hour practice.