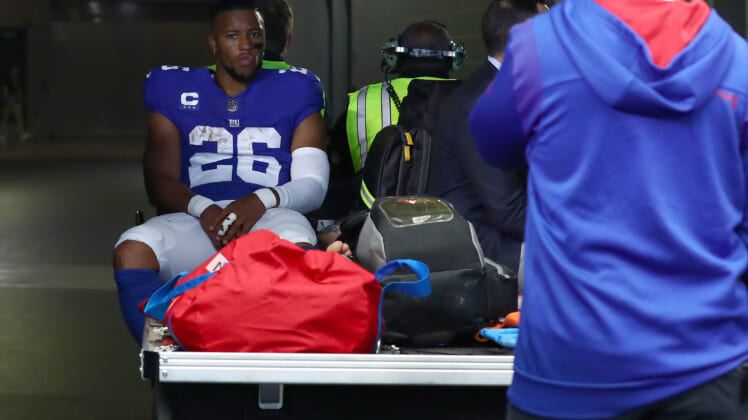 Update: Reports following Sunday’s game indicated that Saquon Barkley suffered a low-ankle sprain and is considered week-to-week. Given how bad the injury looked at first, that has to be seen as good news.

New York Giants star running back Saquon Barkley was finally starting to feel it after recovering from the torn ACL he suffered early during the 2020 season.

The former No. 2 pick had tallied 220 total yards in his previous two games heading into Sunday’s outing against the division-rival Dallas Cowboys.

On just his second rush attempt of the game in the first quarter, Barkley went down with an ugly-looking ankle injury.

Barkley’s ankle did not look great after the play. He was ultimately carted off the field and ruled out with an unknown ankle injury.

All of this comes with Saquon Barkley looking for a new contract. He’s set to hit free agency following the 2022 season and wants to prove that he can stay healthy.

Prior to suffering the ACL injury last season, the Penn State product was off to a tremendous start to his career. He earned NFL Offensive Rookie of the Year honors back in 2018, tallying 2,028 total yards and 15 touchdowns in the process.