The New York Giants are working hard to get under the 2022 NFL salary cap, and a pay cut for veteran wide receiver Sterling Shepard may push them even closer to achieving that goal.

When new Giants general manager Joe Schoen was hired in January, he inherited a 4-13 squad that was well over the salary cap despite not fielding a talent-rich team in 2021. With the NFL offseason at the stage where teams need to clean up their cap situation for an influx of rookies and possible free agents, Schoen has started to make headway on the over $7 million he needs to cut off the teams payroll.

Last week, they released tight end Kyle Rudolph and running back Devontae Booker. On Thursday, the Giants cut ties with punter Riley Dixon after three years. taking all three off the roster removed $10 million from the team’s current cap number. The next salary shoe to drop looks to be a restructured contract for six-year veteran Sterling Shepard.

Under the terms of his current deal, the longest-tenured player on the team was set to be a $12.5 million cap hit this season, and another $13.5 million in 2023. Considering the team’s cap situation and the need to add quality players in several positions, the 29-year-old could have easily been a cap casualty and outright released.

However, on Thursday, ESPN Reporter Jordan Raanan broke the news that the team and player had come to terms on a new one-year pact that will bring Shepard back for the seventh season. The move is important not only because it returns a pivotal player in their pass game, but it is likely to remove $4.5 million from their current books. 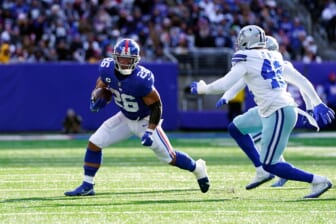 Shepard tore his Achilles in December in a game against the Dallas Cowboys. The injury limited him to just seven games in 2021.

Cutting cap to make a play for Mitchell Trubisky

While the new GM and his brand new coach in Brian Daboll have thrown their support behind incumbent quarterback Daniel Jones, there is a belief the team could be in play for a new QB on the free-agent market.

Earlier this week, reports stated that many within the league felt the Giants were a prime candidate to land former Chicago Bears and Buffalo Bills QB Mitchell Trubisky. The one-time Pro Bowler and first-round pick served as a backup on Daboll’s Bills offense in 2021 and he was a big fan of the coach’s style. 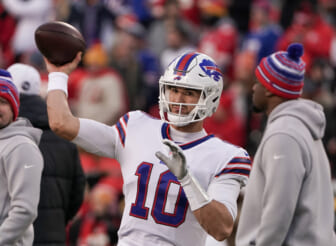 These latest moves now get the team closer to that goal of snagging up Trubisky after March 16.