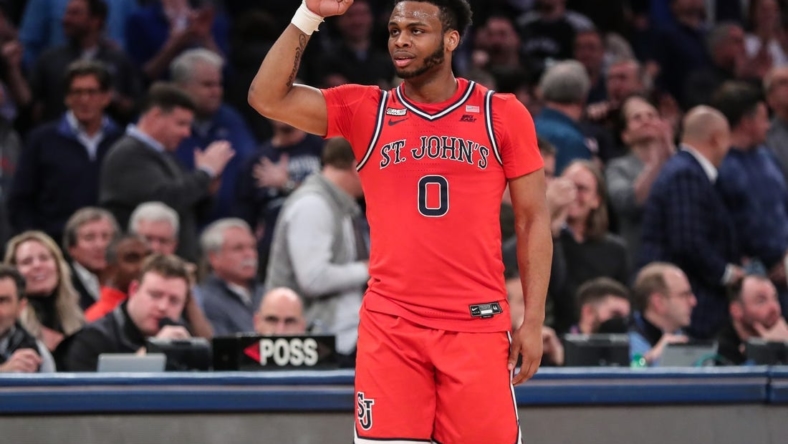 With Julian Champagnie gone after a standout three-year career, St. John’s is banking on another productive season from guard Posh Alexander.

To get him some help, the Red Storm turned to the transfer portal by landing guard Andre Curbelo from Illinois and forward David Jones from DePaul.

The Red Storm get their first look at their two big transfers Monday night when they host Merrimack in Queens, N.Y.

Champagnie averaged 16 points in 88 games with the Red Storm before leaving for the NBA. Despite Champagnie’s individual success, St. John’s has yet to win more than 17 games in any of the first three seasons under coach Mike Anderson.

The Red Storm are picked sixth out of 11 teams in the Big East’s preseason poll and are hoping Alexander continues to improve. He averaged 13.8 points last year after being the conference’s Freshman of the Year in 2020-21.

Jones averaged 14.5 points and 7.4 rebounds on 44.5 percent shooting last season. Curbelo is hoping to rebound from averaging 7.5 points and shooting 32.9 percent in 19 games last season while struggling with the lingering effects of a concussion.

“We talk about having the opportunity to play in the Big East which I think is going to be a league that’s going to be wide open,” Anderson said at media day. “There are a lot of teams that are out there that are very good. Guess what? We’re one of those teams.”

Merrimack heads into its fourth season in Division I with high expectations; it was picked first in the Northeast Conference’s preseason poll.

The Warriors won 14 games last season. They put a scare into Rutgers and also played nonconference games at Gonzaga and Indiana. Merrimack returns four seniors, including Jordan Minor, a preseason All-NEC team pick after he averaged 15.1 points and led the league with 13 double-doubles.

“I’m excited about our four seniors who have stuck it out, others have been transferring all over the place but for them to now be favored to win the league, they are going to be voices of our team,” Warriors coach Joe Gallo told the school’s student newspaper.

The schools are meeting for the first time.