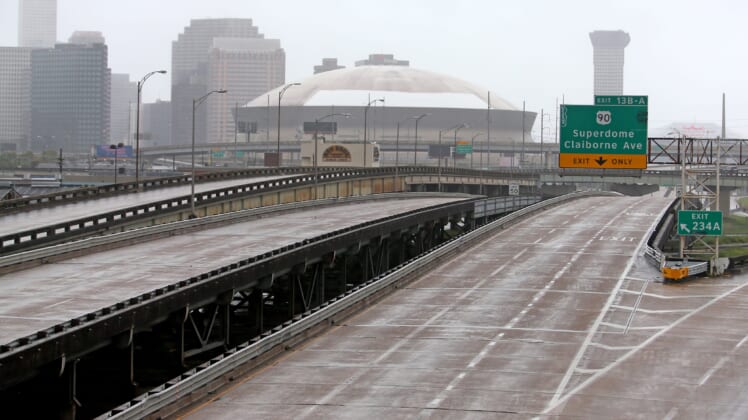 Hurricane Ida hit the Louisiana coast and the New Orleans area as the strongest of its ilk in the state this past weekend. Initially a category four as it headed for the United States’ inland, we’re ways from knowing the full damage that Ida has done to the city of New Orleans.

Sadly, this hurricane hit ground 16 years to the day after Katrina wreaked havoc on the Bayou.

With their preseason finale slated for this past weekend canceled, the New Orleans Saints are now doing what they can to help the battered metropolitan area.

“Most important, we as an organization want to do everything within our power to assist those who have been impacted by the storm and have activated our Gulf Coast Renewal Fund with Owner Gayle Benson making an initial donation of $1 million to support our community throughout Louisiana and the Gulf Coast,” the New Orleans Saints said in a statement.

“Those wishing to donate can do so by going to NewOrleansSaints.com/hurricaneida. We will continue to be in close communication with governmental and community leaders to determine where aid and assistance can most effectively be directed. More details on the fund and other initiatives will be provided in the coming days.”

As Hurricane Ida made its way past New Orleans and turned into a tropical storm more in-land, reports from the city indicate that power could take weeks to be restored to the city. As of Monday afternoon, 960,000 are said to be without power in the region.

As for the Saints, their Week 1 home game against the Green Bay Packers slated for less than two weeks could still be moved. While the SuperDome didn’t receive major damage from the hurricane, the issues in New Orleans could impact whether that game is moved. Head coach Sean Payton touched on that recently.

“We haven’t heard anything relative to the opener,” Payton said, via The Times-Picayune/NOLA.com. “Obviously, we’ll have a Plan B. A lot of things from a priority standpoint are more important for our city. We fully anticipate starting the season with Green Bay and the question is where will it be at.”

The Saints have been a major part of the New Orleans community as hurricanes continue to threaten those in the southern metropolitan area. They played a huge role in rebuilding Nola after Katrina in 2005. We’re expecting that to be the case again, 16 years later.