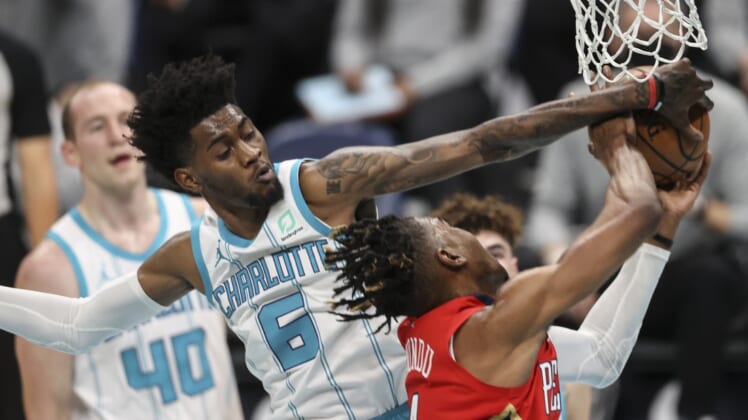 A victory would have clinched a spot in the postseason’s play-in round for the Hornets (33-35), who are in eighth place in the Eastern Conference.

New Orleans is in 11th place in the Western Conference, a game and a half behind 10th-place San Antonio and the final play-in round spot. The Pelicans have four games remaining while the Spurs have five games left.

Jaxson Hayes of the Pelicans scored the only two field goals in the last 1:50 for either team before a 3-pointer from Charlotte’s Terry Rozier in the last second accounted for the final score.

Rozier finished with 43 points, including 24 in the first half.

The Pelicans (31-37) went ahead at 109-107 on Hayes’ alley-oop layup on a pass from Lonzo Ball. With 1:29 remaining, Charlotte’s LaMelo Ball missed two foul shots, allowing the Pelicans to retain their lead.

After an exchange of possessions, Hayes scored again on a hook shot off a pass from Nickeil Alexander-Walker, making it a four-point New Orleans lead with just 12.7 seconds remaining.

After Rozier missed a 3-point attempt with six seconds remaining, Alexander-Walker got the rebound for the Pelicans and made one of two free throws for a five-point advantage and that was that.

Hayes finished with 18 points off the bench for New Orleans, while James Johnson had 17 points and Alexander-Walker and Naji Marshall each posted 13, with 12 from Lonzo Ball.

For the Hornets, LaMelo Ball notched 22 points, reserve Cody Zeller tallied 17 points and P.J. Washington had 14 points and 12 rebounds for Charlotte, which was 3-for-8 on second-half foul shots.

The Pelicans were without forward Zion Williamson, who averages 27 points per outing, for the second game in a row because of a finger injury.

The Hornets used a huge 42-23 second quarter to turn the complexion of the game, building a 67-57 halftime lead. Rozier shot 9-for-15 in the opening half, hitting three 3-pointers.

Rozier scored 11 more points in the third quarter, including a 3-pointer to conclude the scoring as Charlotte held a 96-89 edge going to the fourth quarter, but the Hornets couldn’t hold on.