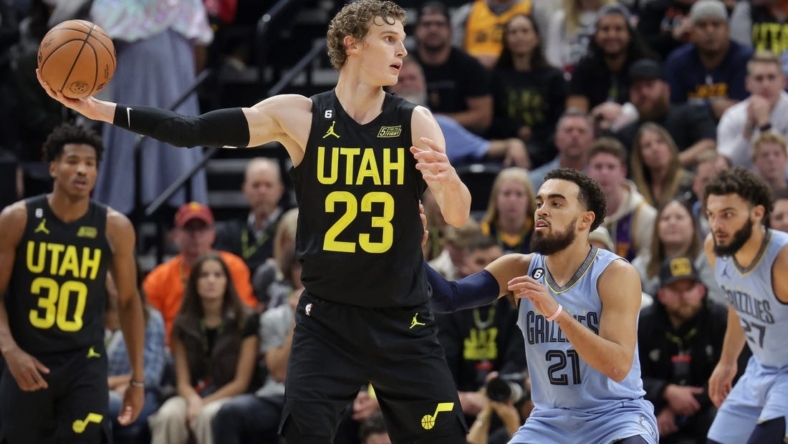 During their surprise start, the new-look Utah Jazz have taken on and beaten teams with elite players, including Nikola Jokic, Karl-Anthony Towns, Zion Williamson and Ja Morant. On Wednesday night, they’ll get their first shot at another superstar, Luka Doncic, when they visit the host Dallas Mavericks.

Judging by the way they’ve played in the aftermath of the Donovan Mitchell-Rudy Gobert-Quin Snyder era, the Jazz certainly aren’t going to quiver at the challenge. They might not have any NBA superstars, per se, but the Jazz aren’t lacking in hustle and determination. It’s led them to six wins in eight games, making them one of the most intriguing success stories of the early season.

“Nobody is backing down or afraid of anything,” Jazz guard Mike Conley said after Utah defeated Memphis 121-105 Monday night in Salt Lake City. “That’s who we are. We are that team and it’s fun to be around that — guys who are scrappy that don’t care about getting elbowed and don’t care about fouling too many times.”

Lauri Markkanen has been the biggest revelation so far for Utah. The 7-foot Markkanen, who previously played for Chicago and Cleveland, is averaging career highs in scoring (22.6), rebounding (9.3), assists (2.9), blocks (1.0) and field-goal percentage (50.7 percent). There’s hope that some of those numbers could rise when his 3-point shooting (a career-low 31.5 percent) returns to where it’s been in previous years, about five percentage points higher.

“He has good feet, and he knows how to use his size and length. He’s a legit 7-footer,” Jazz coach Will Hardy said. “His size, coupled with his ability to move, makes him a good defender.”

The Mavericks might be short-handed against the up-and-coming Jazz.

Center Christian Wood, who’s averaged 16.7 points on 56.9 percent shooting and 8.2 rebounds, has been listed as questionable with a non-COVID illness. Coach Jason Kidd has also said that Frank Ntilikina (right ankle) and Davis Bertans (right knee) are not ready to return to action.

Doncic is coming off a monster performance in a win over Orlando on Sunday. The point guard scored 44 points on 17-of-26 shooting and dished out five assists in the 114-105 victory.

Doncic scored 30 points in the first half, helping Dallas win after a frustrating home overtime loss to Oklahoma City on Saturday. He scored 31 in that one, but it came on 8-of-23 shooting, including 0-for-6 from 3-point range.

“You could tell he was going to be ready to go,” Kidd said. “He came out and set the tone.”

While Utah has surged this season, Dallas has yet to take off. In fact, the Mavs are in a lose, win, lose, win pattern so far this season.

“There’s no reason why we shouldn’t be 6-0,” Dallas guard Josh Green said. “For us, this is a learning curve, and I’m just happy we bounced back.”

This is the third game of a five-game homestead for Dallas. The Jazz begin a three-game trek, heading to Los Angeles for games against the Lakers and Clippers after this tilt in Texas.