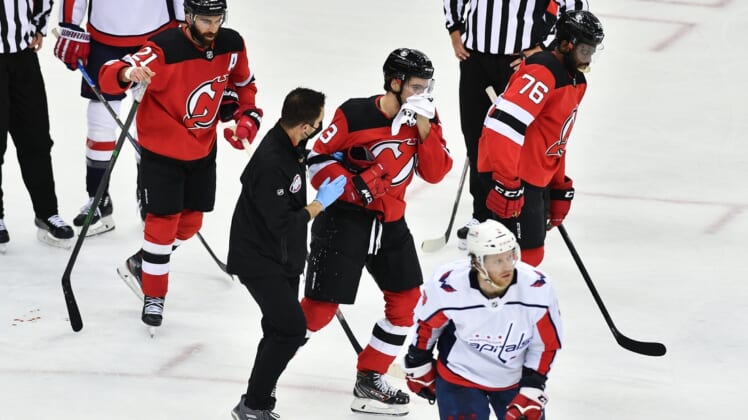 Feb 27, 2021; Newark, New Jersey, USA; New Jersey Devils center Nico Hischier (13) skates off the ice after being hit in the face during a game against the Washington Capitals during the third period at Prudential Center. Mandatory Credit: Catalina Fragoso-USA TODAY Sports

Hischier has a sinus fracture and is in the NHL’s concussion protocol, the team announced. The 22-year-old was hit in the visor by a puck Feb. 27 during a game against the Washington Capitals.

The Devils described Hischier’s status to return as week-to-week. The club recalled forward Janne Kuokkanen from its taxi squad.

Hischier was the No. 1 overall pick in the 2017 NHL Draft. He has two goals and an assist in five games this season, and across 214 career games with New Jersey, he has 53 goals and 85 assists.