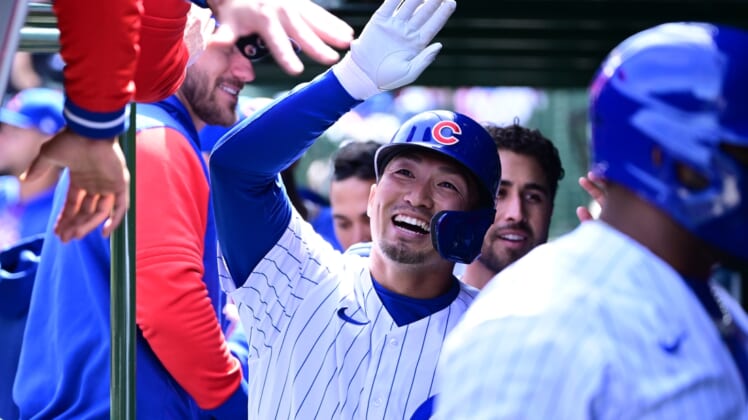 A pair of well-rested teams will be in action Tuesday afternoon when the Pittsburgh Pirates take the field for their home opener against the Chicago Cubs.

The Pirates were scheduled Monday to finish off a four-game series at St. Louis, but that game was rained out and will be made up as part of a split doubleheader June 14.

The Cubs also had a game rained out Friday. They had Monday off after taking two of three games in a shortened opening series against the Milwaukee Brewers.

Chicago outfielder Ian Happ appeared to avoid series injury and should be ready to go for the series at Pittsburgh after he was hit by a pitch on his left knee cap Saturday and sat out Sunday.

Happ went 5-for-7 with two doubles and four RBIs in his first two games of the season.

Pittsburgh will get its first look at Cubs outfielder Seiya Suzuki, who signed a five-year, $85 million contract during the spring after playing for the Hiroshima Carp in Japan. In his first two major league games, Suzuki is 3-for-8 with a home run and six RBIs.

“He knows his (strike) zone and is staying committed to that,” Ross said. “There’s not a lot of even flinching at borderline pitches. If he stays right there, I think he’ll continue to learn these pitchers, learn the environment and continue on the path he’s on.”

The Pirates head into Tuesday’s game after an uneven start through three games – two lopsided losses and a lopsided win against the Cardinals.

In a matchup of left-handers who are making their season debut in the series opener, Chicago’s Drew Smyly (11-4, 4.48 ERA with the Braves last season) is scheduled to face Pittsburgh’s Jose Quintana (0-3, 6.43 ERA with the Angels and Giants in 2021).

Quintana, 33, will be making his Pirates debut one day later than expected after Monday’s game was washed out. The 33-year-old former Cubs starter is a veteran on a mostly young staff.

In fact, mentorship is one of the attributes that Pittsburgh sees as an upside with Quintana.

“One of the things that we tried to identify with José (beyond) on the mound (was) who he was in our clubhouse and the leadership that he would provide in terms of conversations,” Pirates manager Derek Shelton said. “We’re really happy that we were able to add someone of his caliber and quality of person.”

Quintana still must perform on the mound. He signed as a free agent during the offseason and didn’t have a particularly strong spring: 11 earned runs in nine innings over three starts.

“I’ve learned a lot from this game,” Quintana said. “I always compared baseball to life. You learn a lot from your teammates, from the game. Every day is a good day to learn something new.”

Quintana is 0-3 with a 3.76 ERA in four starts against the Cubs in his career. He last pitched against them in 2015 as a member of the Chicago White Sox.

Smyly is coming off a World Series title with Atlanta last season and went 1-0 with a 6.14 ERA in three postseason appearances.

Against the Pirates, Smyly is 1-1 with a 4.71 ERA in six career appearances, five of them starts. He has allowed three or fewer runs in four of those six games.