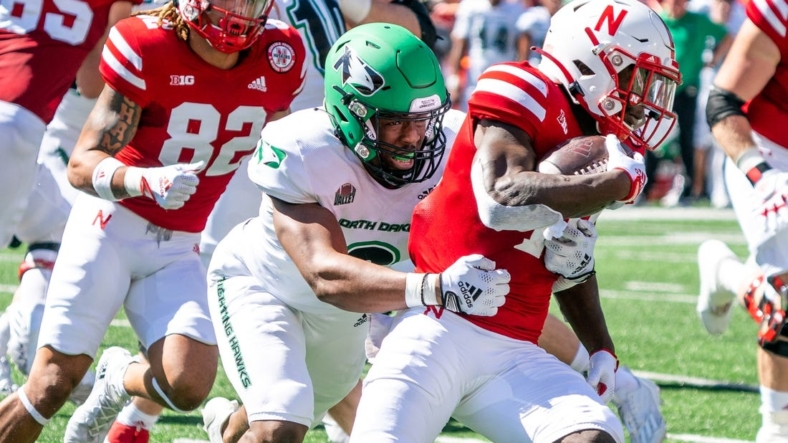 Anthony Grant rushed for 189 yards and two touchdowns and Nebraska pulled away late for a 38-17 over visiting North Dakota on Saturday in Lincoln, Neb.

Nebraska (1-1) scored the game’s final 21 points in the last 17:30 against the upset-minded Fighting Hawks (0-1) to avoid its first loss in school history to an FCS opponent. The Cornhuskers are 14-0 all-time against FCS teams.

Grant, who had scoring runs of 46 and 19 yards, averaged 8.2 yards per carry, while Casey Thompson went 14-for-21 passing for 193 yards with two touchdowns and an interception.

Tommy Schuster went 24-for-37 for 131 yards and a touchdown and no interceptions for North Dakota. Isaiah Smith rushed for 104 yards on 10 carries.

With the game tied at 17, Grant burst down the sideline for a 46-yard scoring run that gave Nebraska a 24-17 lead it wouldn’t relinquish with 2:30 left in the third quarter.

Thompson’s five-yard strike to Chancellor Brewington with 2:07 capped the scoring.

Thompson gave the Cornhuskers a 14-7 lead when he found Nate Boerkircher over the middle for a 19-yard touchdown to cap a six-play, 75-yard drive less than two minutes into the third quarter.

Nebraska extended the lead to 17-7 on Timmy Bleekrode’s 46-yard field goal with 8:36 left in the third quarter.

North Dakota pulled to within 17-10 on Brady Stevens’ 23-yard field goal with 5:52 left in the third quarter. The Fighting Hawks pulled even on Tyler Hoosman’s five-yard run two plays after Wyatt Pedigo stepped in front of Thompson’s pass and returned it to Nebraska’s 8-yard line.

Grant gave Nebraska a 7-0 lead on the Cornhuskers’ first possession when his 19-yard touchdown run capped an eight-play, 87-yard drive with 6:46 left in the opening quarter.

The Fighting Hawks tied the game with 13 seconds left in the first half when Schuster’s one-yard toss to Adam Zavalney punctuated a 16-play, 80-yard drive that consumed nearly seven minutes.