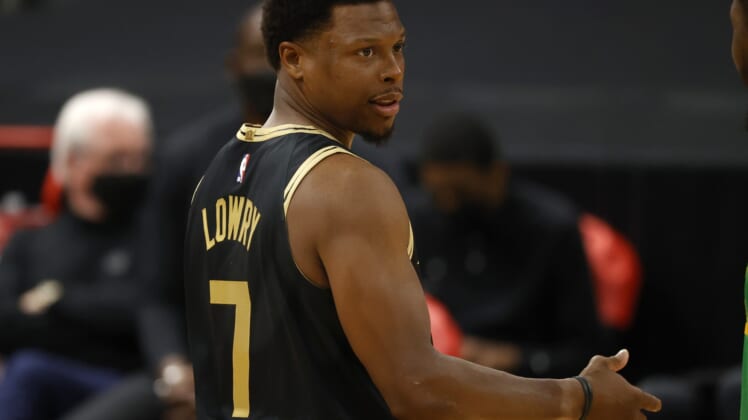 The NBA trade deadline is just days away and Toronto Raptors point guard Kyle Lowry is the biggest name who could be moved before March 25. With competition in the Eastern Conference fierce, the bidding war for the All-Star guard could come down to two teams with NBA Finals aspirations.

While Toronto entered the 2020-’21 season as a title threat, their plans have spiraled downward toward the bottom of the NBA standings. Entering the week at 17-25, struggling through an eight-game losing streak, the Raptors could be active before the trade deadline. Most notably, there seems to be increasing odds that Lowry is traded.

Entering a contract year, Lowry’s days in Toronto are likely numbered. The 34-year-old wants to compete for a championship, an opportunity that he won’t have this year with the Raptors. So, with the Philadelphia native open to a move, contenders have been engaged with the Raptors in trade discussions.

According to The Athletic’s Shams Charania, the Philadelphia 76ers and Miami Heat are the leaders to acquire Lowry. While the Los Angeles Clippers also have interest, it’s believed a lack of draft capital will keep them out of the running. Thus, teams are watching to see whether the Heat or 76ers are willing to move a talented, young player to Toronto.

What would it cost to acquire Kyle Lowry?

An important element of any trade for Lowry will be matching salaries. While there is no long-term financial commitment to the 34-year-old guard, his $30 million is a lot for a club to absorb.

Miami is in the best position financially, sitting $5.5 million under the luxury tax. The Heat would likely package point guard Goran Dragic ($18 million annually over the next two years) as its biggest contract to help facilitate a trade. The club could also includeKelly Olynyk’s expiring $12.1 million contract. Most importantly for Toronto, the front office would likely target a future first-round pick or a young player like Precious Achiuwa.

The 76ers are in a slightly more challenging spot. Philadelphia is currently $11.4 million over the luxury tax, so matching salaries would be crucial. A trade would likely send Danny Green’s $15.3 million expiring contract, Mike Scott ($5 million) and more to the Raptors. In terms of young assets, Toronto would likely seek Matisse Thybulle or Tyrese Maxey to even consider a move.

Toronto wants to do right by Lowry, who helped the team win an NBA championship. While the deciding factor for the organization will be the move that best helps the team’s future, it will also consider where Lowry wants to play.

Given he is a Philadelphia native, who became a basketball star in the region, his preference would likely be the 76ers. It also helps that Philadelphia would be the No.1 seed in the Eastern Conference if the NBA Playoffs started today.

With the NBA trade deadline set for Thursday, we’ll soon find out what team Lowry will be suiting up for. If he is traded, it will have a huge impact on the race for the NBA Finals.