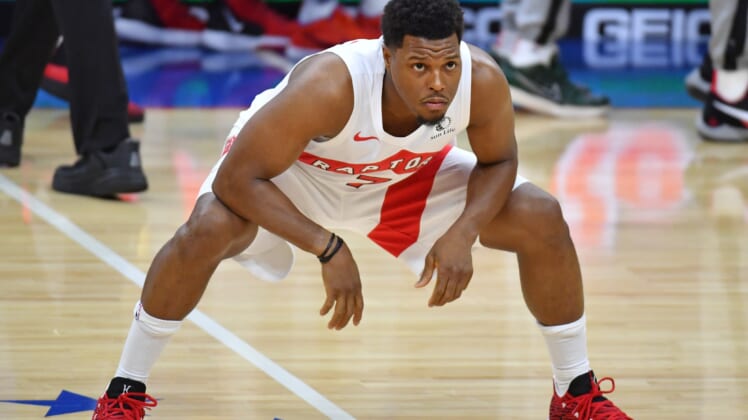 We have absolutely no idea whether a Kyle Lowry trade from the Toronto Raptors is going to happen ahead of the March 25 deadline. What we do know is that the Miami Heat continue to be active on pretty much all fronts after acquiring Trevor Ariza last week.

That could now potentially include adding Lowry to the mix in a trade with Toronto. According to ESPN’s Brian Windhorst, Miami still “covets” the 34-year-old point guard.

Miami’s interest in a potential Kyle Lowry trade can’t be considered too surprising. The team is said to be looking for an upgrade at point guard. Thus far, stud youngster Tyler Herro has held down the fort in that regard. However, he’s seen as more of a two-guard than your traditional point.

With Toronto boasting a 17-24 record and having lost seven consecutive games heading into Sunday, it might now make sense for the team to go into fire sale mode. That would include a Lowry trade.

Despite his advanced age, the 34-year-old Lowry continues to play at a high level. He’s averaging 17.6 points, 5.6 rebounds and 7.5 assists on 39% shooting from distance on the season.

An impending free agent, Lowry would not come cheap. It would certainly be a risk for Miami. But the team needs to do something if it wants to even have a chance to repeat as Eastern Conference champs.

How might a Kyle Lowry trade to the Miami Heat look?

First off, Miami would have to pick up the 2021-22 option on Goran Dragic’s contract in order to make the finances work. It would also have to offer up at least one first-round pick and a couple young players to entice the Raptors. So, here’s how a deal might look.

This hypothetical trade would net Toronto a stopgap option at the point in Dragic. At least over the short term, he could team up with Fred VanVleet. Moving forward, swapping Dragic to another team during the summer could make sense for Toronto. Remember, the team has a stud two-guard in Norman Powell who is averaging nearly 20 points per game on the season.

However, the addition of Robinson to potentially man the three next to Pascal Siakam would have to be seen as the centerpiece in this deal. The Michigan product is shooting 42% from distance throughout his three-year career and has morphed into a quality starter. He’d provide the Raptors with much-needed perimeter shooting.

As for the Heat, it’s rather simple. Lowry would slide in to the point guard spot with Herro moving off-ball. Add in the presence of both Jimmy Butler and Bam Adebayo, and this is a core group that could very well compete with Milwaukee and Philadelphia in the Eastern Conference moving forward.

It’s also important to note that a Kyle Lowry trade would not prevent Miami from hitting the buyout market for another upgrade in the interior. The team is said to be in on LaMarcus Aldridge. If the San Antonio Spurs are unable to trade Aldridge, he is a candidate to head to South Beach as a buyout option.