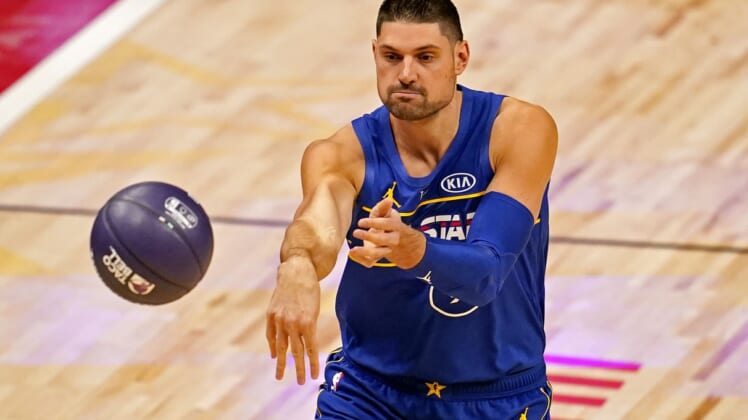 The trade deadline is approaching and NBA rumors are circulating about players who could be on the move. While the likes of Bradley Beal and Zach LaVine will remain with their respective teams, Orlando Magic star Nikola Vucevic is generating tons of interest.

Orlando’s season hasn’t unfolded the way the franchise hoped. After losing Jonathan Isaac tore his ACL in August and guard Markelle Fultz tore his left ACL five months later. Losing both young starters has taken a toll on the Magic, with the team skidding to a 13-23 record at the All-Star Break.

The Magic are expected to be sellers at the March 25 trade deadline, with contenders interested in the likes of Terrence Ross and Evan Fournier. However, it’s Orlando’s All-Star center that is generating the most buzz right now.

With the NBA rumors flying around after the All-Star Game, let’s dive into the latest buzz regarding Vucevic.

According to The Ringer’s Kevin O’Connor, the Boston Celtics, Miami Heat, San Antonio Spurs and Charlotte Hornets have all expressed significant interest in trading for Vucevic.

It’s understandable for the 30-year-old center to be so coveted before the trade deadline. A two-time All-Star selection, the 6-foot-11 big man has turned into one of the more dominant players at his position offensively. Plus, he’s under contract through the 2022-’23 season and is only the seventh-highest-paid center in the NBA.

Since entering the league as the No. 16 pick in the 2011 NBA Draft., Vucevic’s growth is remarkable. In his first five seasons, he made just seven three-point shots and hit 26.9% from beyond the arc. But he dedicated time to becoming a better outside shooter and the work has paid off.

After sinking a career-best 98 three-pointers in 2019 across 62 games, Vucevic is set to shatter that mark this season. He has already drilled 96 threes, hitting 41.2% of his attempts, across 36 games. He also improved from the free-throw line, sinking 85.1% of his attempts this season.

Unsurprisingly, many around the league think it’s unlikely Orlando signs off on a trade. The Magic have watched Vucevic blossom into a star and they could rebound next season with a top rookie and the return of a healthy Isaac.

If Vucevic isn’t moved, contenders will just have to set their sights a little lower. While there isn’t an elite talent available right now, impact starters and key role players will be moved in the weeks to come.