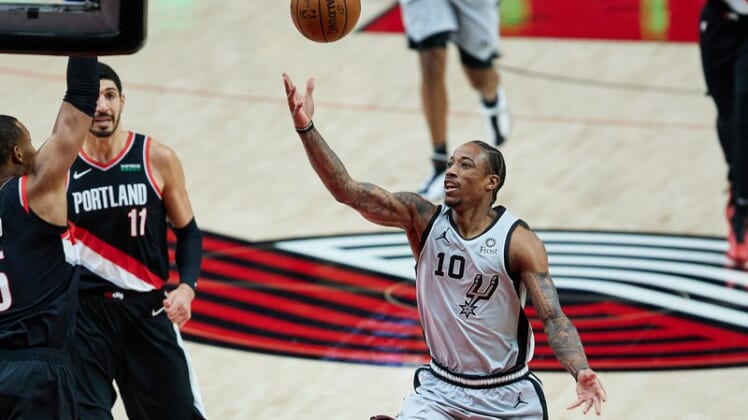 NBA rumors have died down on the San Antonio Spurs trade front with Gregg Popovich’s squad in the midst of a surprising 2020-21 season.

In no way does that mean San Antonio is going to stand pat. The team needs to be thinking about its future since struggling to remain relevant after decades of championship contention.

We’re now hearing some more information on the Spurs leading up to the March 25 NBA trade deadline. That could include them moving their two best-known players.

“The Spurs are receiving calls on their veteran players who are pending free agents — LaMarcus Aldridge, DeMar DeRozan, Rudy Gay, Trey Lyles and Patty Mills — and are listening to inquiries, sources said,” Shams Charania of The Athletic noted.

It’s not necessarily too much of a surprise that NBA rumors are pointing in this direction. San Antonio is off to a surprising 18-13 start to the season, primarily due to its talented young core.

Keldon Johnson, Dejounte Murray, Derrick White and Lonnie Walker IV are all averaging double figures. As Charania notes in his report, this would be the first time since the Spurs’ 2003 championship team that they’ve had four players under 30 average double-digit points.

There’s a number of contending teams out there who would be interested in this four-time All-Star. DeRozan, 31, is averaging 20.0 points, 4.9 rebounds and 7.3 assists on 49% shooting from the field. He’s also an above-average wing defender.

The Boston Celtics have been linked to wings in the lead up to the NBA trade deadline. It also appears that general manager Danny Ainge is looking to make a splash with his team mired in some major recent struggles.

Perhaps, Boston could entice San Antonio with rookie Aaron Nesmith and a first-round pick. Remember, the Celtics have a huge trade exception stemming from the offseason Gordon Hayward deal with the Charlotte Hornets.

Among other contenders, the New York Knicks (gasp) could have interest in DeRozan. New front office head Leon Rose already pulled off a trade for former NBA MVP Derrick Rose and promises to be active ahead of the deadline in three weeks.

Does LaMarcus Aldridge have any value?

As with DeRozan, Aldridge is an impending free agent. Unfortunately, his trade value is not too high right now. The 35-year-old seven-time All-Star is in the midst of his worst season since he was a rookie back in 2006-07. Aldridge is averaging 13.7 points and 4.5 rebounds on 46% shooting from the field.

Despite this, his expiring contract and wealth of experience could make Aldridge an interesting option for contending teams. Not surprisingly, the above-mentioned Celtics could make sense. However, the forward also seems to be a pretty good potential fit with the Dallas Mavericks.

Rudy Gay, Trey Lyles and Patty Mills could also be interesting under-the-radar options for contending teams if San Antonio opts to blow this entire thing up.

Even if the Spurs were to move on from a few of these players, they would still be playoff contenders given the core group we mentioned above. It would also help expedite San Antonio’s rebuild process.