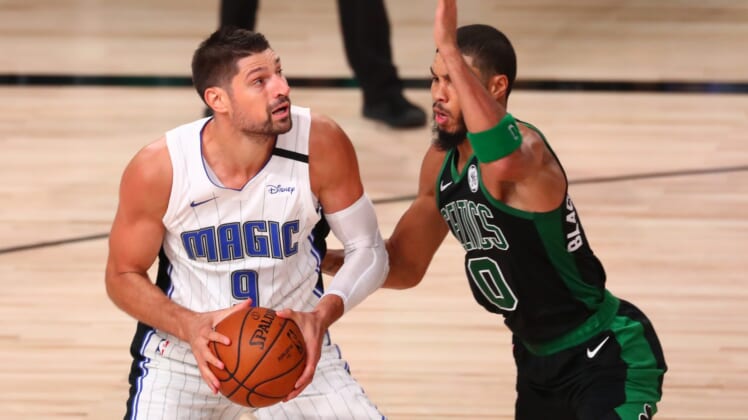 The NBA trade deadline is near and there are a flurry of Boston Celtics rumors swirling about the team’s potential plans to help make the leap in the Eastern Conference. While there aren’t many great options available this time around, it seems Boston is setting its sights on a blockbuster deal.

Trade speculation is nothing new out of Boston. The team explored a deal for James Harden, there was increased chatter about a big move and even Danny Ainge added fuel to the rumors. While all is quiet right now, it seems Ainge and Co. might have their eyes focused on a move that would shake up the NBA standings.

Here’s the latest on what the Celtics might be looking for at the NBA trade deadline.

Everyone knows Boston needs help at center. Every time a quality big man becomes available, it’s a safe bet to assume Ainge will make a call. After passing on the opportunity to acquire Myles Turner this offseason, the Celtics might have their next target for an upgrade over Daniel Theis and Tristan Thompson.

According to the Athletic’s Shams Charania, the Celtics are among the team interested in Orlando Magic star Nikola Vucevic. However, multiple teams around the league believe it would take a massive return to convince Orlando to deal him.

Thus far, the Magic haven’t been interested in a blockbuster deal. The organization loves having Vucevic and is confident the team will be a lot better next season with a healthy Jonathan Issac and Markelle Fultz. But it’s possible that could change if the right offer comes along.

The Celtics have some interesting trade chips and are in a unique financial position with the $28.5 million trade exception from the Gordon Hayward deal. In terms of assets to move, Boston has Romeo Langford, Aaron Nesmith, Robert Williams III, Carsen Edwards and its 2021 first-round pick.

Vucevic would be a phenomenal addition for Boston, or any other team that landed him. The 30-year-old is averaging a career-high 24.6 points per game this season, tacking on 11.6 rebounds, 3.7 assists and one steal per contest. More impressively, he shoots 48.3% from the field and is hitting 41.2% of his shots from beyond the arc.

He is a dangerous threat in the post, a skill he had early in his tenure with the Magic. As of late, he’s turned into an excellent outside shooter and is on pace to pass his single-season high for three-pointers made (98) in his next game, accomplishing the feat in 25 fewer games than it took last season.

While there’s plenty of unpredictability heading into the trade deadline, one guarantee is Boston making at least one move to improve their odds of reaching the NBA Finals.