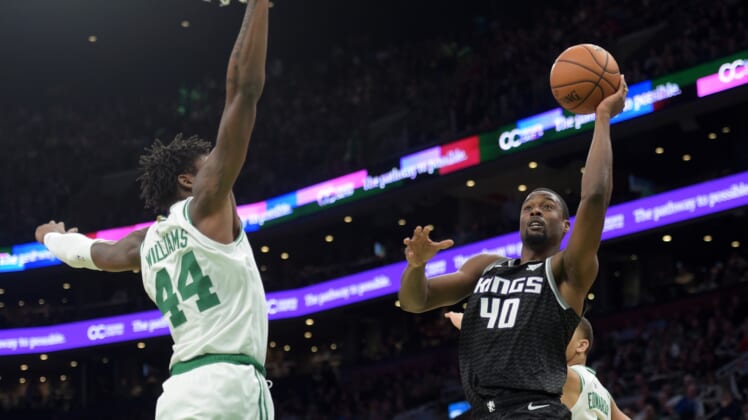 The NBA trade deadline is approaching and even more Boston Celtics rumors are starting to build, with word that a big trade could be on the horizon. As the team overcomes injuries in its battle for playoff positioning, general manager Danny Ainge could be eyeing a top forward to bolster Boston’s lineup.

Boston enters play on Friday with a 13-11 record, sitting within striking distance of the Philadelphia 76ers for the No. 1 seed in the East. As multiple Eastern Conference contenders explore the trade market, with several interested in Andre Drummond, the Celtics are in the market for upgrades at the wing and center.

While the NBA trade deadline isn’t until March 25, Ainge and Co. seem to already have targets in mind who could help this team make a serious run at the NBA Finals this season.

According to The Athletic’s Sam Amick, Sacramento Kings forward Harrison Barnes is squarely on the Celtics’ radar for a potential trade. While the Kings are playing great basketball as of late, climbing in NBA power rankings, Boston is among the NBA teams hoping the 28-year-old wing becomes available.

Coming into the 2020-’21 NBA season, Barnes’ contract likely made him a player many wanted to avoid. He is owed $22.2 million this season and $38.6 million over the final two years of his deal. But the former No. 7 overall pick and NBA champion is elevating his trade value this year with stellar play and leadership. Barnes is averaging 16.7 points per game this season, his highest mark since averaging 17.7 points in 2018 with the Dallas Mavericks.

The scoring averages are an improvement from the previous two seasons, but the real progression comes from his efficiency. Barnes is shooting a career-high 49.1% from the field this season and is even more lethal beyond the arc. A 40% three-point shooter during his best years with the Golden State Warriors, Barnes is shooting 41% from deep this season.

Barnes is also averaging a career-high 6.5 rebounds per game, while his leadership and defense have also significantly impacted the Kings. Sacramento has won seven of its last nine games entering Friday’s action, currently sitting in the No. 9 spot of the Western Conference.

If the Kings slide down the NBA standings, Barnes could become one of the top players available on the market. He would fit nicely for Boston under the $28.5 million trade exception created by the Gordon Hayward sign-and-trade. With Sacramento seeking to build a core that fits around De’Aaron Fox, Boston has the assets that would match Sacramento’s timeline.