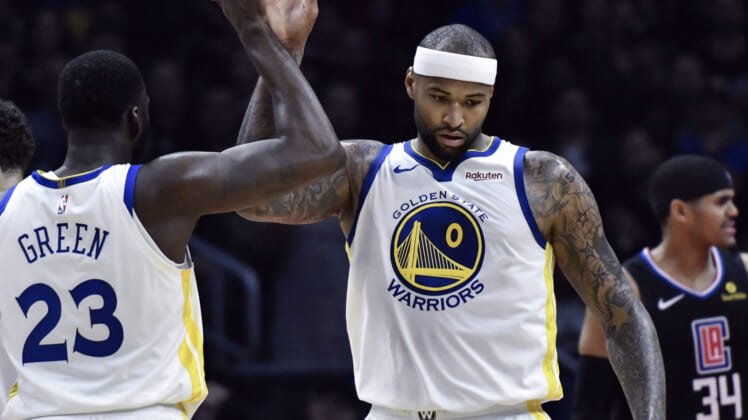 All-Star center DeMarcus Cousins has performed well in his short time as a member of the Golden State Warriors.

Just recently having returned after suffering a torn Achilles with the New Orleans Pelicans last season, the Warriors are undefeated in the five games Cousins has played in.

One of the best big men in the entire Association, Cousins had to take a small one-year, $5.345 million deal with the Warriors this past summer. The above-mentioned Achilles injury played a major role in this. In fact, Cousins was slated for a max deal in free agency prior to suffering said injury.

Common logic suggests that Cousins’ tenure with the Warriors will be short-lived. The team can only offer him a small increase from his 2018-19 salary in free agency.

With that said, Cousins is extremely happy with the Warriors and fits in well. There’s reportedly a chance that he’ll take another pay cut this summer — hoping to then sign a max long-term deal following the 2019-20 campaign.

“I’ve heard Cousins is really happy and that bodes well for the chances of him taking a pay cut again. Still slim, I’d say,” The Athletic’s Marcus Thompson reported on Wednesday.

Given that both Kevin Durant and Klay Thompson are expected to hit free agency this summer, there’s a small Golden State’s core could change as it moves into San Francisco’s Chase Center next season.

However, the team’s brass has noted that it will spare any cost to retain the championship core. That could include promising Cousins a max extension in 2020 in hopes he signs a smallish one-year deal this coming summer.