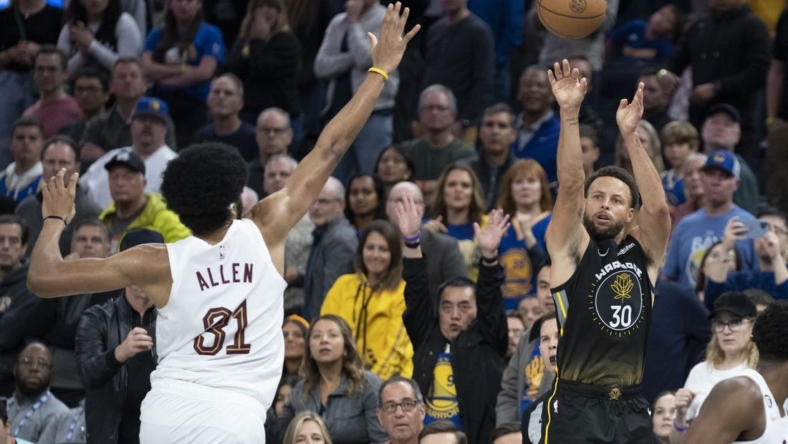 Stephen Curry scored 15 of his 40 points in the fourth quarter and the Golden State Warriors won a second consecutive game for the first time this season, rallying for a 106-101 victory over the Cleveland Cavaliers on Friday in San Francisco.

During the final two minutes, Curry scored 10 straight Golden State points over a 65-second span as the Warriors notched their 11th consecutive regular-season victory over the Cavaliers.

Al Horford had 21 points, Grant Williams added 13 and Derrick White finished with 10 for Boston, which has won five straight.

Nikola Jokic led the Nuggets with 29 points, Aaron Gordon had 17, and Bruce Brown had 16 points and 10 rebounds. Denver played without Bones Hyland, who was out due to health and safety protocols.

Jalen Brunson supplied 26 points, seven assists and four steals as the Knicks bounced back from a poor outing against the Brooklyn Nets on Wednesday. Julius Randle contributed 21 points, eight rebounds and five assists.

Bojan Bogdanovic led eight Pistons in double figures with 25 points. Alec Burks, making his season and Detroit debut, tossed in 17 points off the bench. Burks was traded by the Knicks in a draft-night deal.

Franz Wagner scored 17 points, Jalen Suggs had 16 and Terrence Ross added 14 points off the bench to fuel the Magic to their second straight win after losing nine of their previous 11 games. Bol Bol had 13 points and a career-high 15 rebounds.

Phoenix’s Cameron Payne scored 22 points while making his second straight start in place of the injured Chris Paul. Devin Booker collected 17 points, eight rebounds and six assists and Deandre Ayton had 14 points for the Suns, who have lost three of their past five games.

Domantas Sabonis had 21 points, 10 rebounds and six assists, while Kevin Huerter added 16 points for Sacramento, which has won five of its past seven games.

Anthony Davis led the Lakers with 24 points and 14 rebounds, while Russell Westbrook tallied 21 points and 11 assists. Los Angeles played without star LeBron James, who is listed as day-to-day with a strained left adductor.

Eugene Omoruyi scored a career-high 22 points as Oklahoma City finished with eight players in double figures for the first time in franchise history in a win over visiting Toronto.

Chris Boucher led Toronto with 20 points and a season-high 12 rebounds, while Fred VanVleet and Scottie Barnes had 15 points apiece. The Raptors have lost five of their first seven road games this season.

Keldon Johnson poured in 29 points as host San Antonio used a torrid early-fourth-quarter run to wrap up a win over short-handed Milwaukee and snap a five-game losing streak.

The Spurs led by seven points heading into the final quarter and put the game out of reach via a 16-5 run to push their lead to 99-81. Devin Vassell added 22 points while Jakob Poeltl racked up 15 points and 10 rebounds in the win.

Morant made 11 of 25 shots while adding 10 rebounds and eight assists to lead the Grizzlies to their fifth win in the last six games. Desmond Bane contributed 24 points, and Dillon Brooks finished with 21.