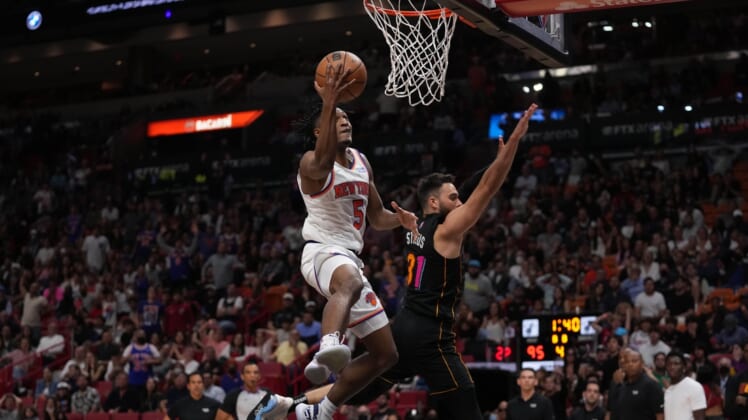 Reserve guard Immanuel Quickley scored 20 of his 23 points in the fourth quarter as the visiting New York Knicks rallied to upset the slumping Miami Heat 111-103 on Friday.

RJ Barrett added 18 points for the Knicks, who also got 15 points and eight rebounds from Obi Toppin. New York won for the fourth time in six games.

The Heat, who lead the Eastern Conference with a 47-27 record, have lost three straight and are 3-5 in their past eight games. Jimmy Butler led Miami with a game-high 30 points and added seven rebounds and seven assists.

James Harden and Joel Embiid each recorded a double-double and Philadelphia bolted to a 21-7 lead and never looked back in an easy win at Los Angeles.

Harden finished with game highs of 29 points and 15 rebounds, while Embiid chipped in with 27 points and 10 rebounds. The duo helped the 76ers avenge a January home loss to the Clippers and prevail for the fifth time in six games overall.

Amir Coffey had a team-high 21 points for the Clippers, who lost their fifth straight.

LaMelo Ball added 21 points for the Hornets, who were trying to atone for a home loss to the Knicks that ended a five-game winning streak.

Donovan Mitchell poured in 26 points and Jordan Clarkson finished with 19 points for the Jazz, who have lost three in a row.

Deni Avdija supplied 21 points, 10 rebounds and four assists for the Wizards, who won for just the second time in 10 games and overcame a 54-32 disadvantage in points in the paint.

Marvin Bagley III topped the Pistons with 25 points, adding five rebounds. Cade Cunningham had 22 points, nine assists and seven rebounds for Detroit, which has dropped three of the past four games.

Young shot 12-for-20 from the field, including 4-for-9 from 3-point range, and finished with his 37th double-double of the season. Young, 23, knocked down his 700th career 3-pointer, making him the youngest player to reach that milestone.

Golden State’s Klay Thompson responded from taking Wednesday’s game off for injury management by scoring 37 points, one shy of his season high. The Warriors lost for the fourth time in five games.

Towns didn’t look the worse for wear despite being listed as questionable for the game due to a right forearm contusion. Jordan McLaughlin scored 16 points and D’Angelo Russell added 15 for the Timberwolves. However, Minnesota lost Malik Beasley to a sprained left ankle in the second quarter.

Luka Doncic recorded 24 points, 10 rebounds and eight assists, but he was whistled for a technical foul as time expired in the third quarter. He has 15 technicals on the season, with the next one earning him an automatic one-game suspension.

Jae’Sean Tate added 17 points and Kenyon Martin Jr. tallied 16 for the Rockets, who never trailed while easily handling the Trail Blazers in the first of back-to-back meetings between the teams. They meet again Saturday night in Portland.

Trendon Watford recorded 19 points and six assists and Drew Eubanks scored 18 points for the Trail Blazers, who lost for the 12th time in their past 14 games.