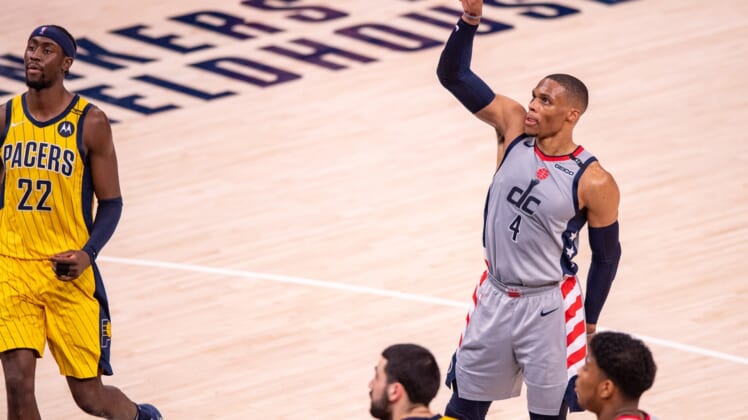 Russell Westbrook recorded the 181st triple-double of his career, tying Oscar Robertson’s all-time NBA record, and hit the game-winning free throws with one second remaining in overtime to lead the Washington Wizards to a 133-132 win over the Indiana Pacers on Saturday in Indianapolis.

Westbrook finished with 33 points, including Washington’s final two points in regulation on a finger-roll in traffic, and game-highs of 19 rebounds and 15 assists. The Wizards (32-36) overcame a 12-point, fourth-quarter deficit behind Westbrook’s history-matching night and 50 points from Bradley Beal.

Edmond Sumner hit a mid-range jumper to give Indiana (31-36) a 132-131 lead with 1:03 to go in overtime. Justin Holiday blocked Westbrook’s first attempt to recapture the lead in the final seconds of overtime. After a Wizards timeout, Westbrook drew a foul on his jump-shot attempt, and he sank the game-winning foul shots.

Caris LeVert scored 35 points for his third game of 30-plus points in the past four and came in clutch for the Pacers in the second half.

The Warriors remained in eighth place in the Western Conference with their second consecutive win over the Thunder and fourth win in five games. Curry finished with 11 of Golden State’s franchise-record 27 3-pointers.

Oklahoma City has lost six in a row and 23 of its last 25. Svi Mykhailiuk led the Thunder with 17 points off the bench while Luguentz Dort added 16 points.

It was the fifth win in a row for Utah, which continues to play without injured All-Star guards Donovan Mitchell and Mike Conley. Utah became the first team in the NBA to reach the 50-win mark while also stretching its lead for the No. 1 seed in the playoffs over idle Phoenix to 1 1/2 games.

Rudy Gobert added 13 points, 14 rebounds and three blocked shots, and Joe Ingles scored 14 points with seven assists and six rebounds for the Jazz. Kenyon Martin Jr. and Khyri Thomas each scored 27 points for the Rockets, who lost their fifth straight.

Kevin Durant had 33 points and 11 rebounds, Kyrie Irving scored 31 and Brooklyn ended a four-game losing streak by rallying to win at Denver.

Joel Embiid scored 29 points on 11-of-13 shooting to lift host Philadelphia past lowly Detroit for its season-best eighth consecutive victory.

Tyrese Maxey scored 22 points for the Sixers, who moved closer to clinching the top seed for the Eastern Conference playoffs. Jerami Grant and Saddiq Bey scored 14 points each for the Pistons.

Damian Lillard scored 30 points in only three quarters and CJ McCollum added 27 as host Portland rolled over San Antonio in a game with serious playoff implications for both teams.

The Trail Blazers won their third straight game and seventh in their last eight. They are sixth in the Western Conference standings, a half-game behind idle Dallas for the fifth spot with four games remaining on its regular-season schedule.

DeMar DeRozan paced the Spurs with 20 points, while Lonnie Walker IV scored 18 and Dejounte Murray racked up 15. The Spurs, who have five games left to play, still have a near-lock on the 10th spot and the final position in the play-in tournament.

Jonas Valanciunas’ 18 points and 21 rebounds and Jaren Jackson Jr.’s 20 points helped visiting Memphis secure a victory over Toronto and continue its push toward a postseason berth.

Eighth-place Memphis moved four games ahead of the idle 11th-place New Orleans Pelicans with five left to clinch at least a berth in the play-in tournament.

Pascal Siakam and Gary Trent Jr. each had 18 points to lead the Raptors, who lost for the sixth time in their past seven games. Toronto was officially eliminated from postseason contention after the loss and the Wizards’ victory over the Pacers.