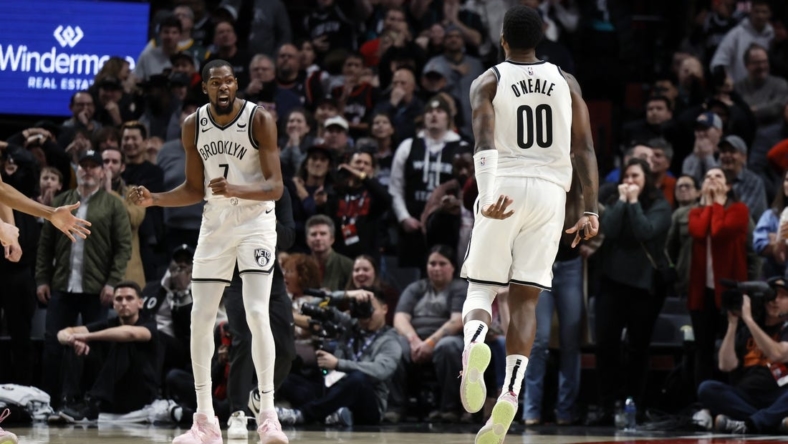 Royce O’Neale capped his first career triple-double by converting the tiebreaking tip-in with 0.7 second remaining as the visiting Brooklyn Nets earned a 109-107 victory over the Portland Trail Blazers on Thursday.

O’Neale totaled 11 points, 11 assists and 10 rebounds — and no play was bigger than how he finished Brooklyn’s last possession.

After Portland’s Jusuf Nurkic converted a tying three-point play with 6.5 seconds left, Brooklyn’s Kevin Durant missed a 21-footer from the left elbow and O’Neale jostled around Damian Lillard and Josh Hart to convert the dramatic layup.

Durant scored 35 points and became the 19th player to reach 26,000 career points early in the third. Ben Simmons posted his first double-double as a Net, collecting 15 points, 13 rebounds and seven assists before fouling out. Lillard led the Trail Blazers with 25 points and 11 assists.

Ivica Zubac tied a career high with 18 rebounds as the Clippers extended their winning streak over the Pistons to seven games. Leonard played in just his third game this season, scoring six points in 25 minutes. He had missed the past 12 games with residual knee soreness from ACL surgery in July 2021.

Bojan Bogdanovic scored 26 points and Jaden Ivey added 18 as Detroit dropped its fifth consecutive game. The Pistons are 1-8 since Oct. 31.

De’Aaron Fox scored a team-high 28 points, Malik Monk chipped in with 26 and Sacramento made it five wins in a row by beating visiting San Antonio.

Domantas Sabonis and Harrison Barnes contributed 16 points apiece for the Kings, who have gone over 120 points in each game of the streak. Fox also tallied a game-high eight assists, and Sabonis and Barnes shared game-high rebound honors with eight.

Devin Vassell tallied a game-high 29 points for the Spurs, who lost their third straight to open a five-game trip.