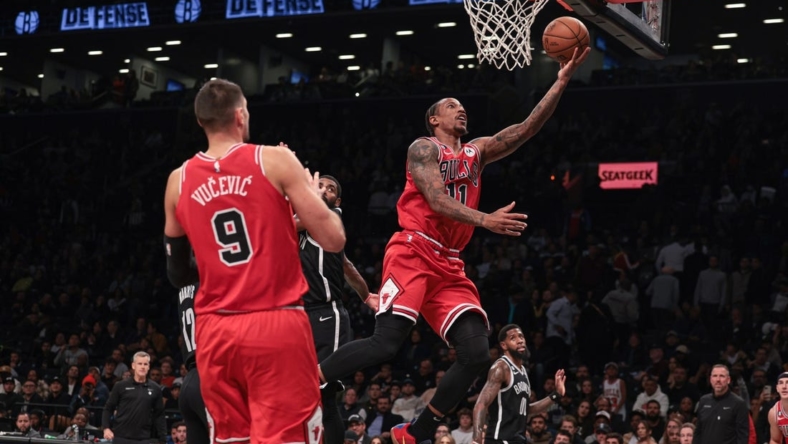 Zach LaVine scored 20 of his season-high 29 points in the fourth quarter as the Chicago Bulls rallied down the stretch for a 108-99 victory over the struggling Brooklyn Nets in New York.

The Nets, playing hours after parting ways with coach Steve Nash, lost for the sixth time in eight games this season. The Bulls snapped a two-game skid.

Brooklyn’s Kevin Durant led all scorers with 32 points to go along with nine rebounds and six assists. Royce O’Neale added 20 points. Kyrie Irving was held to four points on 2-of-12 shooting and did not score until early in the fourth.

Stephen Curry produced his 10th career triple-double with 23 points, 13 assists and 13 rebounds for the Warriors, who took their third straight loss. Miami was also led by reserve guard Max Strus, who scored a game-high 24 points as the Heat snapped a two-game losing streak.

The Warriors fell to 0-4 on the road in part because they couldn’t stop Butler in a couple of crucial situations. Butler made the go-ahead three-point play with 1:48 left for a 112-109 lead. Butler also made a mid-range jumper with 9.5 seconds left, giving Miami a 114-109 edge.

The Thunder closed with a 23-4 run, with Gilgeous-Alexander putting up 12 points in the stretch to lift Oklahoma City from 11 down. The Magic missed their last 11 shots. Aleksej Pokusevski had 16 points and nine rebounds for Oklahoma City.