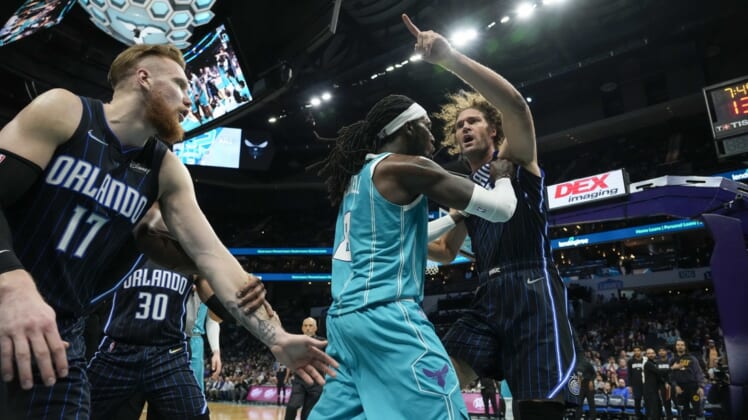 The NBA fined three players a total of $50,000 on Saturday for their roles in Thursday night’s on-court altercation between the Orlando Magic and host Charlotte Hornets.

All three players received technical fouls and were ejected with 7:45 remaining in the fourth quarter of Charlotte’s 128-101 victory.

The incident began when Charlotte’s Jalen McDaniels fouled Orlando’s R.J. Hampton on a drive to the basket and the pair had to be separated.

“Lopez escalated the incident when he aggressively approached and made contact with the Hornets’ PJ Washington, who was acting as a peacemaker between Hampton and McDaniels,” read a statement issued by the office of NBA president of league operations Byron Spruell.

“Harrell, who then made contact with Lopez, was shoved forcefully in the back by Schofield. Both Schofield and Harrell were deemed to have further escalated the incident.”

Harrell, 28, joined Charlotte in a Feb. 10 trade with the Washington Wizards and is averaging 11.5 points and 5.0 rebounds in 24 games off the Hornets’ bench.