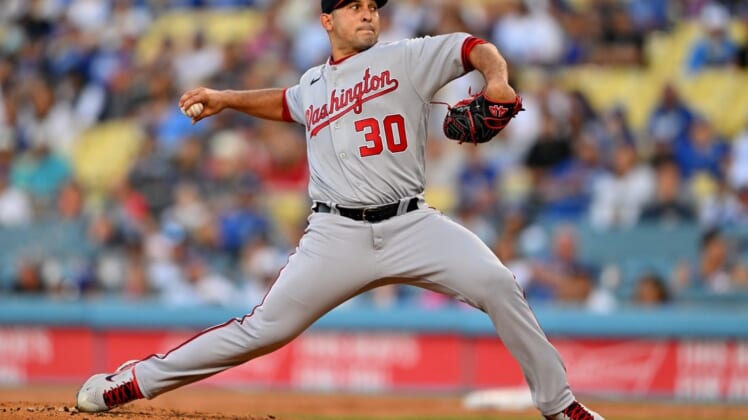 Juan Soto hit a two-run triple in a four-run fifth inning and the visiting Washington Nationals parlayed the worst record in the National League into a 4-1 victory Monday over the Los Angeles Dodgers, who opened the day as the best team in baseball by mere percentage points.

Soto, who has been the subject of trade rumors in advance of the Aug. 2 deadline, had his first hit and RBI since his career-best 27-game hitting streak ended Saturday at Arizona. Yadiel Hernandez added a home run for Washington.

Trayce Thompson hit a home run for the Dodgers, who lost for the first time since July 12 and entered on a run of 19 victories in their previous 21 games. It was Los Angeles’ first home loss since July 3.

Dodgers starter Tony Gonsolin did not give up a hit through four innings, but the first-time All-Star gave up five hits in the fifth when the Nationals took the lead for good. Gonsolin has given up nine runs over his last two outings, not counting the three he gave up in last week’s All-Star Game.

The Dodgers broke through first when Thompson hit his third home run of the season in the third inning.

The Nationals got even when Hernandez hit a home run to lead off the fifth, his seventh of the season. Ehire Adrianza and Victor Robles had two-out singles in the inning before Cesar Hernandez hit a bloop single to left for a run. Soto then tripled into the right field corner for two more and a 4-1 advantage.

Nationals starter Paolo Espino gave up one run on four hits over four innings, while Andres Machado (1-0) pitched a scoreless fifth inning to earn the win. Washington right-hander Kyle Finnegan pitched the ninth inning for his third save.

Gonsolin (11-1) gave up his four runs on six hits over six innings with three walks and four strikeouts, while absorbing his first loss since July 19 of last season.