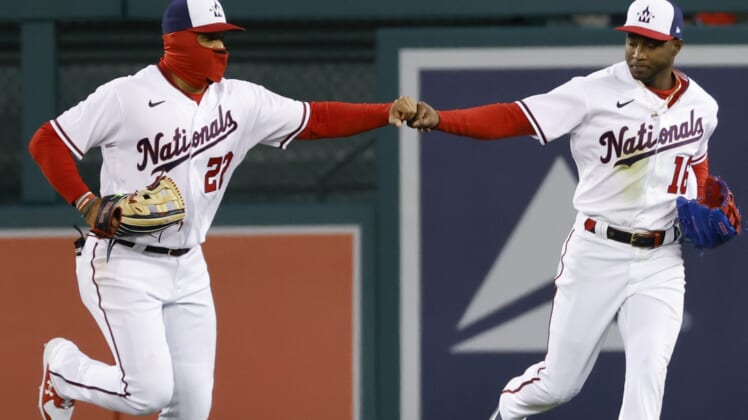 Adon (1-2) allowed three hits over 6 1/3 scoreless innings while walking two and striking out five. Victor Arano finished the seventh inning, and Kyle Finnegan tossed a 1-2-3 eighth. Tanner Rainey stranded the bases loaded in the ninth for his third save.

Arizona began the ninth by sandwiching singles from David Peralta and Pavin Smith around a walk to Christian Walker. Rainey struck out Seth Beer, got pinch hitter Jake McCarthy to pop out and induced a flyout from Sergio Alcantara to escape the jam and secure the victory.

The Nationals, who won the opener of the split doubleheader 6-1, are 6-4 since opening the season with three straight losses.

Arizona starter Tyler Gilbert (0-1) retired 11 straight batters in the nightcap before running into trouble in the sixth. Victor Robles hit a leadoff single and went to second on Lucius Fox’s sacrifice bunt that was misplayed for an error. Hernandez’s double off the left field wall knocked in Robles.

Washington appeared primed for a big inning after Nelson Cruz was intentionally walked with one out to load the bases. Josh Bell flied out, and Sean Poppen then replaced Gilbert and struck out Lane Thomas to end the inning.

Gilbert made an impressive season debut, allowing one run on three hits over 5 2/3 innings. He walked one and struck out three.

Adon became the first Nationals starter this season to complete six innings. He departed after allowing a one-out single in the seventh. Arano struck out the next two batters.

Pavin Smith had three of Arizona’s five hits. The Diamondbacks were held to one run in the doubleheader and have lost eight of their first 11 games.

The Diamondbacks began the day with major league lows for batting average (.152) and runs (21).

Adon cruised through the first six innings after posting a 10.00 ERA over his first two starts covering nine innings.