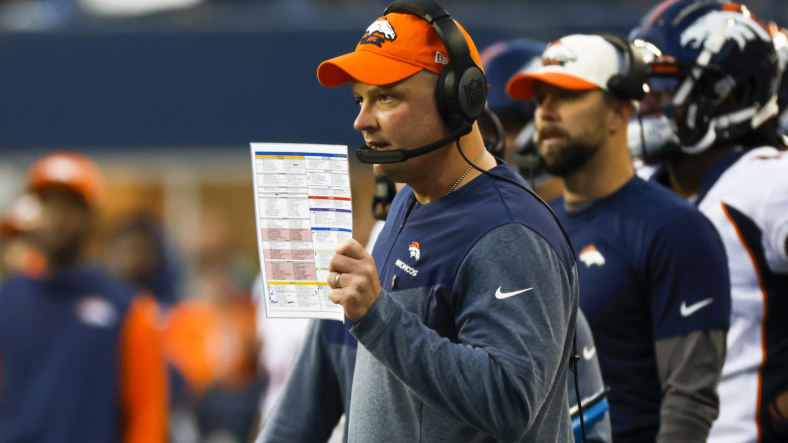 In his first game as the Denver Broncos head coach Monday night, Nathaniel Hackett found himself in the news for all the wrong reasons. Denver found itself down 17-16 late in the fourth quarter against the Seahawks in Seattle. His Broncos were facing a fourth-and-five in plus territory with future Hall of Fame quarterback Russell Wilson making his team debut.

What seemed to be a brain fart at the time came back to haunt Hackett and Co. in Wilson’s return to Seattle. With three timeouts remaining, Hackett let the play clock go all the way down to one before calling one of those timeouts. He then trotted Brandon McManus on to the field for a 64-yard field goal attempt. While the kicker had the leg, the attempt missed wide left and sent Denver to an ugly Week 1 loss.

Hackett has since received a ton of criticism from those around the NFL, including former Broncos great Peyton Manning.

In speaking to the media on Monday, Hackett reversed course and now says that he should have kept the ball in the hands of Mr. Wilson. “Looking back at it, we definitely should’ve gone for it,” Hackett on late-game field goal decision.

This is different than what Hackett had to say immediately following Monday night’s upset loss to the Seahawks.

What changed for Nathaniel Hackett between Sunday night and Monday afternoon?

Those of us watching the game were thrown for a loop. Not only did Hackett attempt what would’ve been the third-longest field goal in NFL history, he actually had three timeouts and a chance to get the ball back if Denver had not converted on third down.

Remember, there was well over a minute remaining in the fourth quarter following the third-down play. Even if Wilson and Co. failed to convert, stopping Seattle on three-and-out would have still set up the Broncos with a chance to win.

Outside of that, we’re talking about a quarterback in Wilson who is going to be a first ballot Hall of Famer and just signed an historical $242 million extension. How can you not give him a chance to get the ball closer for a chip-shot attempt from McManus?

It seems that Nathaniel Hackett has had hours to think about this decision and now agrees with those who blasted him in the first place. Such is the nature of the beast when it comes to a rookie head coach making his debut on national television.