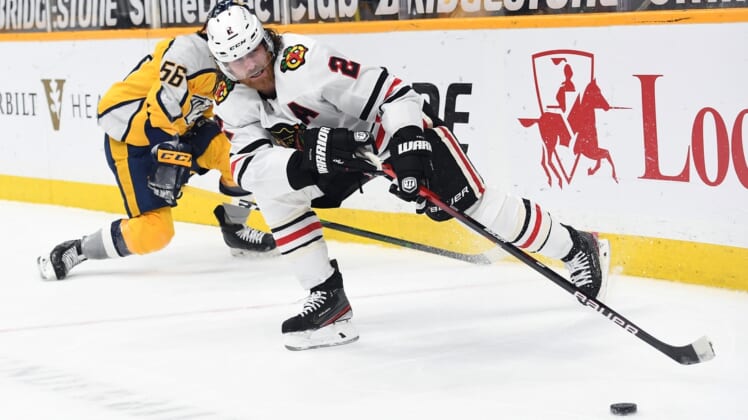 The Nashville Predators scored two goals in 18 seconds in the third period to pull away for a 5-2 win over the visiting Chicago Blackhawks on Monday night.

The rapid-fire goals by Tanner Jeannot and Luke Kunin propelled Nashville to its sixth straight win over Chicago this season. Matt Duchene, Calle Jarnkrok and Mattias Ekholm also scored for Nashville, which notched its 12th victory in the past 16 games.

Alex DeBrincat and David Kampf scored for Chicago, which slipped four points behind Nashville for fourth place in the Central Division.

Blackhawks netminder Kevin Lankinen allowed five goals on 22 shots before he was replaced early in the third period. Malcolm Subban turned aside all eight shots he faced in relief.

Jeannot helped break the game open 23 seconds into the third period. He tapped in his second goal after the Blackhawks failed to clear the puck out of their defensive zone.

Kunin notched his fifth goal at the 41-second mark to make it 5-2 and chase Lankinen from the game.

Nashville opened the scoring 6:22 into the first period. Duchene parked near the front of the crease and scored on a deflection for his fourth goal of the season and his first since Feb. 11.

The Blackhawks pulled even on a power-play goal by DeBrincat with 4:46 left in the first period. He ripped a one-timer from the left circle for his 23rd goal, which leads the team.

The Predators responded with two goals in 51 seconds in the second period to go ahead 3-1.

Jarnkrok scored the tiebreaking goal at 4:48 of the second period. He skated toward the net and converted on a perfect pass by Mikael Granlund from behind the net.

Ekholm followed with a breakaway goal to increase Nashville’s lead. He took a pass near center ice, carried the puck into the offensive zone and beat Lankinen on his glove side with a low shot.

Chicago cut the deficit to 3-2 with 8:08 remaining in the second period. Kampf swept a shot in the net for his first regular-season goal since March 3, 2020, snapping a drought of 49 games.