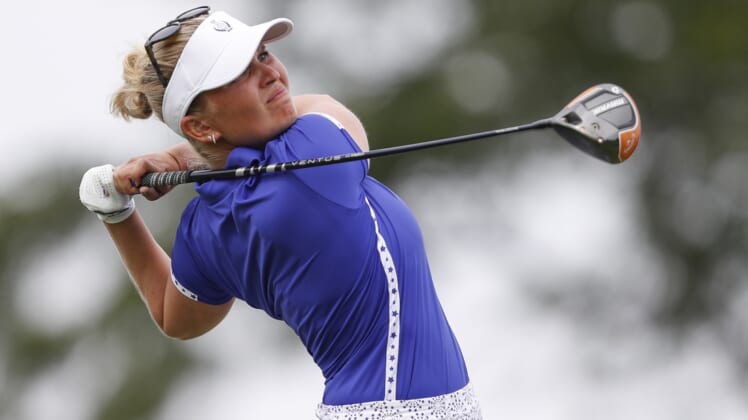 She shot a 5-under-par 67 on Sunday to finish tied with China’s Xiyu Lin for a tournament-record 26-under 262 at Lin Siam Country Club. Jessica Korda set the previous tournament record of 25 under in 2018.

Koerstz Madsen sank a 10-foot putt on the second hole of the playoff to become the first Danish player to win on the LPGA Tour.

“It’s amazing. It’s a dream come true,” the 27-year-old said. “It was a crazy day. A lot of good things. It was actually fun playing the playoff with (Lin) at the end. I’m really excited to be standing with the trophy right now.”

It nearly went horribly wrong for Koerstz Madsen, who held a four-stroke lead over Lin through 15 holes. The former made a bogey on No. 16 and the latter added a birdie on the following hole to halve the deficit.

Koerstz Madsen sent a shot into the grandstand behind the green on the 18th and settled for a bogey. Lin, in turn, sank a 5-foot putt to force a sudden-death playoff.

“She really fought. She finished up birdie-birdie, so she played amazing, too,” Koerstz Madsen said of Lin. “Yes, I’m not going to lie, I was a little nervous there.”

Lin, however, was reduced to tears after she fell just short of her first LPGA Tour title.

“I’m very proud. Sometimes it’s just weird. You shot 26-under and then cannot win a tournament,” Lin said. “But that’s my lowest ever shot in a tournament week, and like four days of very solid golf. Like I’m going to take a lot from this.”

France’s Celine Boutier finished one stroke back of Koerstz Madsen and Lin in third place. She carded an eagle on the 18th hole to cap her round on Sunday at 67.

“It’s all uphill and into the grain, so I just was focusing on hitting it close and just make a birdie,” Boutier said. “Then when I made contact, I knew it was like a good shot and I knew I had a chance, but having it go in is definitely a bonus.”

Danielle Kang, who ended in a four-way tie for eighth place, made a hole-in-one on the par-3 eighth hole. She found the hole from 132 yards out with a 9-iron for her fourth hole-in-one in competition.

“All I thought was like I think I’m due for a hole-out. Might as well just do it here. And then I saw it tracking and then I went, ‘No way,'” Kang said. “It landed and I was like, ‘No way.’ Because normally sometimes it sits. It’s soft out here. I was like, ‘Wait a second, it’s actually rolling.’ And it went in … and everyone screamed.”