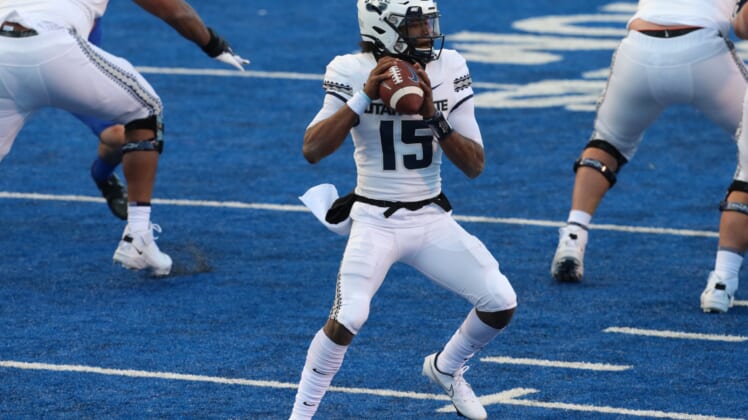 One of the fastest offenses in all of college football. One of the most-underrated offenses in the Mountain West Conference and the whole country. A small school making a lot of noise. Utah State was one of the most-entertaining and underrated teams in the entire country over the past couple of years. The common denominator? Jordan Love.

Utah State was led by the transcendent Jordan Love at quarterback. Love’s arm was impeccable. He was able to move well in and out of the pocket and had a special type of vision. His decision making was suspect at times and his competition wasn’t always the best, but Love was the perfect fit for the no-huddle offense in Logan.

Now, Love is gone. The Aggies also lost their top receiver and their top linebacker. It was expected that head coach Gary Anderson was going to scramble to replace his departing players’ productions.

The Aggies were faced with the biggest obstacle of the season right at the start of the season. The Aggies played the toughest team in the Mountain West for the past five years, Boise State.

Jordan Love was arguably the best quarterback in college football in 2018 and 2019. Teams saw his talent, and the Green Bay Packers selected him with the No. 26 pick in the 2020 NFL draft.

With Love gone, the world knew Utah State would not be able to match his talent and production. However, it might be worse than people have thought. Newly appointed starting quarterback, Jason Shelley, struggled mightily in his first start of 2020.

He finished the game completing 14-of-28 passes for only 92 yards. Granted Boise State has a great defense, but Utah State made it look unbeatable. Shelley’s QBR was 16.2, and Aggies fans were probably spending most of the game reminiscing about the good old days.

Shelley was not all to blame for the loss. He had no time to throw the ball. This was surprising because the line was believed to be the strength of Utah State’s offense going into the 2020 season.

The Aggies returned three out of five starters from last season, and the experience was supposed to be the biggest attribute for the line. However, this was not the case in the team’s first game of 2020.

This is concerning for the Aggies as Boise State lost three defensive starters from last year including the Mountain West’s all-time sack leader, Curtis Weaver. The Aggies regressed in 2019 on offense, and in 2020, it seems like the team’s offense needs a whole restructuring.

The one bright side for Utah State was the running game

The Aggies do not have much to boast about after their first game of the 2020 season. Losing to a fellow Mountain West rival is never easy. Losing in blowout fashion makes it hurt even more.

Despite the poor performance, there were a few bright spots. One of those bright spots was the rushing attack led by Jaylen Warren. The running game was the key source of offense for the Aggies, accounting for more than half of the team’s total yards.

Senior running back Jaylen Warren led the way for the Aggies, finishing the game with 89 rushing yards on 23 carries. He also scored the only points for the Aggies.

Warren will be the key ball carrier for the Aggies and will be essential if the Aggies look to bounce back.