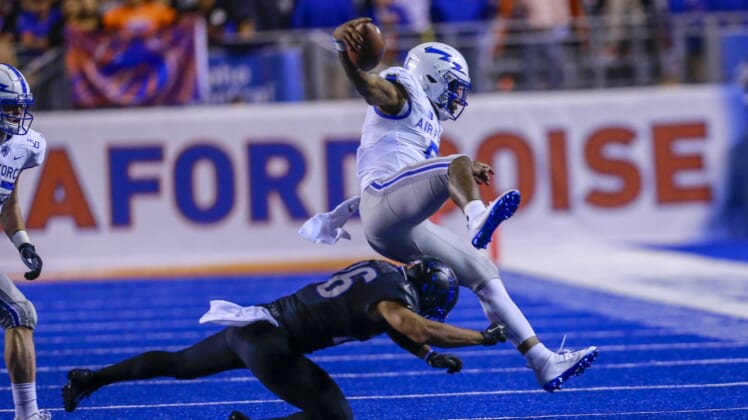 Mountain West football is officially back. Last week, the conference announced its schedule for the 2020 season. It is scheduled to start October 24th and the conference championship will take place on December 19th, 2020.

Due to the circumstances, there will not be two separate divisions and the conference championship will be played by the two teams with the best win percentage.

Here is the breakdown for some of the best matchups of the 2020 season within the Mountain West Conference.

Disclaimer: Mountain West is one of those conferences that always has a surprise team. Hawaii was that team in 2019, and Utah State was that in 2018. This is all based on last year’s performance.

Boise State is the household name in the conference. They have been atop the Mountain West two times since 2017, and the conference-only schedule will benefit the team a great deal.  Boise State lost a lot of key pieces on both sides of the football, and a matchup against a tough Utah State team might put them on upset alert.

Utah State lost the best quarterback in school’s history, Jordan Love, to the NFL. For Love’s final season, they struggled on offense due to inconsistencies at the receiver position and offensive line. However, Utah State is coached very well by Gary Anderson and it has experience on its side.

The Aggies return over 44% of their receiving touchdowns, and it will be interesting to see how they play without Jordan Love. The quarterback position is a big question mark. But given the bizarre seasons so far, it seems fitting for Utah State to shock Boise State.

Air Force had a phenomenal 2019 season finishing 11-2, only losing to Boise State and Navy. They are also the only team in the Mountain West to play a football game this season. Air Force played Navy on October 3rd and the team completely dominated. Air Force ran all over Navy rushing for 369 yards and won 40-7.

Army has looked very good this season scoring over 35 points in three out of its four games. The team came close against a top-20 team in the country, Cincinnati. Army lost by four to Air Force last year and will be looking for revenge.

This is one of the best rivalries in all of college football. The game will be a must-watch.

These were the top-two teams in the Mountain West last year. Air Force looked very good versus Army and should be able to continue that success versus San Jose State Week 1.

As stated earlier, Boise State will have its hands full Week 1. This might also be a situation where they start the season 0-2. In 2019, it was a battle between these two teams as they were tied at halftime, but Boise State would pull away to win 30-19.

It will be Halloween for their matchup and spooky things tend to happen. Air Force’s run game might be too much for Boise State to handle. If the former Mountain West champions start 0-2, the conference title hunt will be wide open.