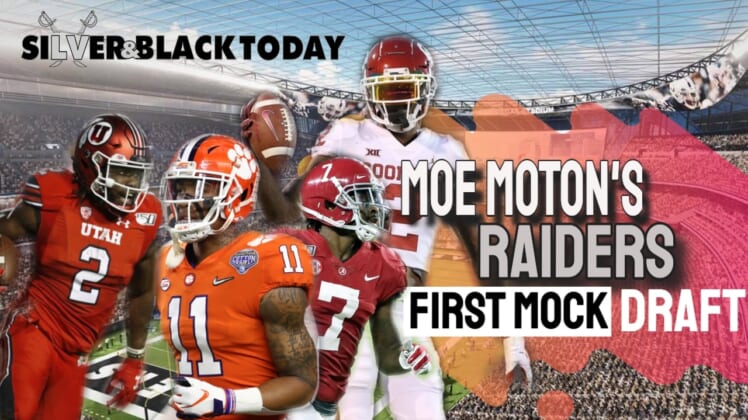 With underclassmen now having declared with last week’s deadline, we take a look at what could be as the Las Vegas Raiders get ready for their first NFL Draft on their own turf.

For Las Vegas Raiders fans who would prefer to take their minds off the two teams that advanced to Super Bowl LIV, you can tap into what could be in store for the Silver and Black as they’re set to host their first NFL Draft in their new desert home.

Collegiate underclassmen had to declare for the draft this past Friday at 4 p.m. making the landscape of what the Raiders could do a bit clearer. Linebacker Isaiah Simmons publicly announced he’d forego his senior campaign at Clemson Saturday, but will he be available at 12 when Las Vegas gets their first selection?

Now that we have a clear picture of the 2020 talent pool, it’s officially NFL Draft season—a time to watch game tapes, dig into a prospect’s skill set and explore his background.

Last April, general manager Mike Mayock and head coach Jon Gruden targeted productive, high character prospects with a winning pedigree in the NFL Drafdt. The 2019 class looks promising, but the team will need to put together another solid group to keep the franchise moving in the right direction.

This year, the Raiders have fewer picks going into the evaluation process—seven compared to nine last offseason. Still, Mayock will have two first-round picks to address major holes on the depth chart and three third-rounders in a draft deep at wide receiver and cornerback—two positions in need of talent.

Using The Draft Network’s mock draft simulator, we can take a look at where certain prospects could land and how the Raiders can use their selections. Each pick made below reflects what was available while on the clock.

Although CeeDee Lamb at No. 12 seems like a pipe dream, the draft always comes with surprises. Most people logically have him slotted to the Arizona Cardinals to reunite with his former Oklahoma teammate Kyler Murray.

Keep in mind, Arizona selected three wide receivers in last year’s draft. Larry Fitzgerald will return for another season. The Cardinals have bigger voids to fill within a defense that ranked 28th in scoring and last in yards allowed in 2019.

The Raiders could go on the clock and see Lamb on the board. If so, Mayock and Gruden have an easy decision to make unless linebacker Isaiah Simmons miraculously falls outside the top 10.

Lamb could step in as the No. 1 wide receiver in Gruden’s offense. He can extend gains after the catch, break tackles like a running back and routinely beat one-on-one coverage.

At 6’2″, 189 pounds, Lamb doesn’t play with a big frame, but he fiercely competes for contested passes. More importantly, the former Sooner doesn’t lose track of the ball while hand fighting or jockeying for position on a catch, which shows great awareness on the field.

Lamb won’t have the fastest 40-yard time, but we should pay more attention to his football IQ and pass-catching skills. Gruden would enjoy lining him up in different spots to expose favorable matchups.