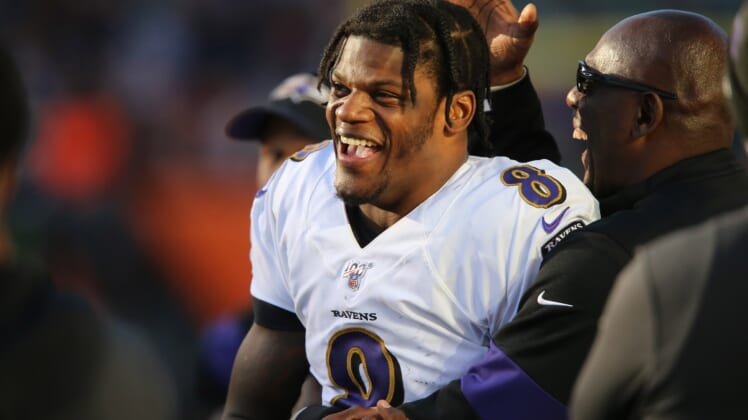 The Los Angeles Rams are hosting the red-hot Baltimore Ravens at the Los Angeles Memorial Coliseum on Monday Night Football in Week 12.

The Ravens are arguably the NFL’s best team. Heading into this Monday Night Football showdown in Los Angeles, they’ve won six in a row while absolutely embarrassing the likes of Seattle, Houston and New England.

The Rams are still clinging to playoff hopes at 6-4 on the season, but this isn’t the same team that made it to the Super Bowl this past February.

These are the biggest questions we have heading into the Monday Night Football game featuring the Ravens and Rams.

Which Jared Goff will we see?

There is no doubt that Jared Goff has taken a step backward in his fourth season. He’s had some astonishingly poor outings this season and comes into Monday night’s game with 11 touchdowns and 10 interceptions. Still, there have been a couple of times recently in which Goff has played well enough to lead his team to victory while avoiding the killer turnover.

For reasons we’ll get into here momentarily, Goff cannot afford to be anything less than razor sharp during the Monday Night Football showdown against the Ravens. If he struggles with accuracy and turns the ball over with careless decisions, the Rams will have almost no shot to win.

Will Baltimore continue its defensive surge?

Everyone loves to talk about how dynamic and fun to watch the Baltimore offense is. For good reason. But an underrated aspect of this team’s recent six-game winning streak has been how dominant the Ravens are on defense. Going back the last five games, Baltimore has allowed just 14.6 points per game, holding the Seattle Seahawks, New England Patriots and Houston Texans to a combined 36 points.

The big battle we’ll be watching is how the Baltimore front seven matches up against a porous Los Angeles offensive line. The way these teams have trended this year, this is a matchup the Ravens could win handily — likely leading to a blowout victory.

Will Todd Gurley be the X-factor?

The Ravens only allow 94 rushing yards per game, but a lot of that has to do with teams abandoning the run just to try and keep up offensively. Baltimore is susceptible to being burned on the ground. It allows 4.4 yards per carry and has yielded 10 rushing scores.

Todd Gurley has been playing well of late and is coming off his strongest game of the season against Chicago.

So, if Sean McVay gets Gurley involved early and the Rams can consistently churn out first downs on the ground, it would potentially kill two birds with one stone — keeping Jared Goff from getting hounded on passing plays, and keeping Lamar Jackson off the field.

Will Marcus Peters get his revenge game?

The Rams made a huge trade last year to land Marcus Peters. Then, in order to create cap space for Jalen Ramsey, they shipped him off to Baltimore in a deadline deal this season — a move that seems to be rather lopsided in favor of the Ravens.

Since the trade, Peters has not one, but two pick-sixes to his name. Furthermore, the Ravens have seen a significant boost in overall pass defense and are now one of the most-feared units in the NFL.

Now, Peters will get a chance to get back at his old team going against a quarterback that has struggled often in 2019.

Can the Rams slow down Lamar Jackson?

Jackson has been that good, folks. He comes into this Monday Night Football matchup against the Rams with 3,039 yards and 25 touchdowns from scrimmage, and the second-year quarterback has only gotten better as the season moves along.

So, if the Rams can’t figure out a way to slow Jackson down, you can pretty much forget about a victory for the home team.