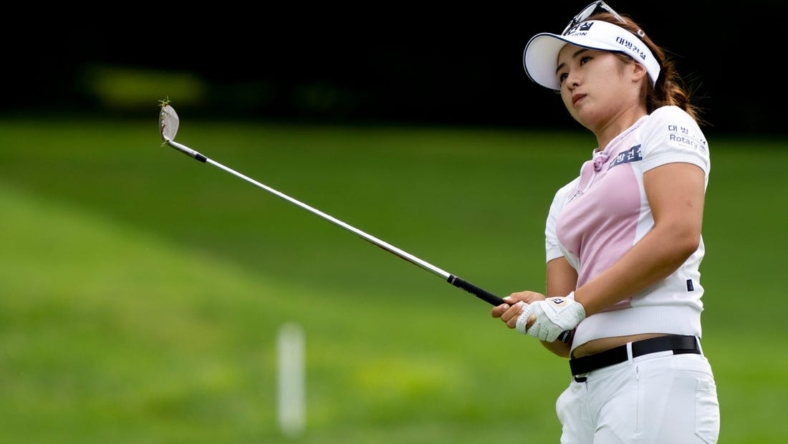 Momoko Ueda shot 4-under 68 on Saturday to maintain a one-shot lead entering the final round of the Toto Japan Classic in Shiga, Japan.

A two-time winner of the tournament, Ueda stands at 14-under through three rounds at the Seta Golf Club. One shot back is Scotland’s Gemma Dryburgh at -13 after posting a 65, mixing eight birdies with a bogey.

Despite being in position for a wire-to-wire victory, Ueda was slightly disappointed with her Saturday round.

“My shots were not so good like same as yesterday. I missed a short putt and it made me unable to play well today,” she said. “Then, I talked with my caddie about today’s game plan and decided to get birdies as much as possible in par-5 holes in the back nine.”

And it worked. After two birdies and two bogeys on the front nine, Ueda delivered four birdies and a bogey on the back nine in front of the home-country crowd.

Miyu Yamashita of Japan (69 on Saturday) is two shots back of Ueda at 12-under, alone in third place after closing her round with birdies at three of the last four holes.

Linn Grant of Sweden holed five straight birdies at Nos. 12-16 on her way to a third-round 67 to put her in a tie for fourth at 10-under with four other players, including major champion Jeongeun Lee6 of South Korea.

“It was good overall. I think the first nine was not where I wanted to be and kind of showed up on the last nine and put some birdies in, which made it more fun,” said Grant, who is striving to become the fourth Swede to win the Toto Japan Classic. “I tend to get better the more nervous I get. Like if I get in contention or I get a bit hyped up, I usually tend to hang onto that and do better.”

Udea said she needs to make a change if she is to win on Sunday.

“I am not comfortable with the rhythm for swing and also for putting this week. So, keeping a good rhythm would be a key for tomorrow,” she said.

Drybaugh, however, said she will strive for more of the same.

“I hit a lot of good shots and had a couple where I hit to a foot, so always handy to do that. Putted well, so everything was working pretty well today,” she said. “I’m going to try and do the same that I did today as tomorrow, so keep it steady and hopefully do the same thing.”