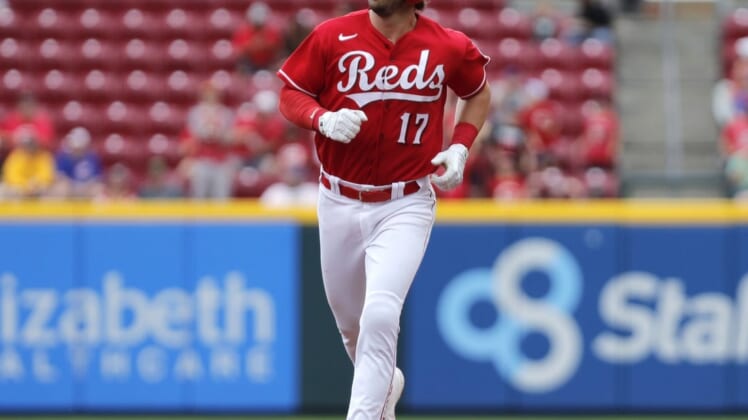 Kyle Farmer homered twice and the Cincinnati Reds used a season-high eight-run third inning to rout the visiting Chicago Cubs 20-5 and earn a split of their four-game series Thursday afternoon.

Farmer, who received a cortisone shot for his sore back on Sunday, missed the first three games of the series before returning to the lineup to face left-handed starter Justin Steele. Farmer went 4-for-4 and matched a career high with five RBIs.

Freddie Freeman went 4-for-5 with a homer, two doubles and five RBIs as Los Angeles recorded a season-high 24 hits in a rout of Arizona in Phoenix.

Christian Walker homered for Arizona, which has lost six of its first eight meetings with the Dodgers this season.

Ohtani (3-3) gave up the homers to Springer and Guerrero and five runs in six innings overall. Ohtani struck out 10, including three in the third inning. But he also gave up three runs on three hits and one walk in the inning, which proved to be decisive.

Enrique Hernandez hit his second leadoff homer of the series as the Red Sox won for the seventh time in eight games. Story hit his ninth homer this month and has 32 RBIs in his past 21 games. Verdugo had a pair of RBI doubles before adding an RBI single in Boston’s five-run eighth.

Chicago’s Andrew Vaughn drove in a career-high five runs. He hit a two-run double and a three-run homer.

Josh Hader returned from a family medical emergency to earn his 16th save in 16 tries as visiting Milwaukee edged St. Louis.

Hader, who had not allowed a run since last July 28, was away from the Brewers for the previous three games to be with his wife, Maria Macias, after she experienced pregnancy complications. Luis Urias hit a solo homer for the Brewers, who won for the sixth time in eight games.

Paul Goldschmidt went 2-for-4 for the Cardinals with a homer, a walk and two runs while extending his hitting streak to 17 games and his on-base streak to 31 games.

Miguel Cabrera had three hits and drove in two runs, including the game-winner in the bottom of the ninth inning, and Detroit edged visiting Cleveland.

Cabrera knocked in Jonathan Schoop, who smacked a one-out double off Trevor Stephan (2-2) and moved to third on a wild pitch prior to Cabrera’s walk-off hit. Robbie Grossman had two hits and scored two runs for Detroit in the opener of a four-game series. Detroit starter Tarik Skubal allowed three runs on five hits in seven innings. He struck out five and walked one.

Aaron Nola pitched 8 1/3 innings and won his first game since Opening Day to help Philadelphia beat host Atlanta and earn a split of the four-game series.

Nola (2-4) allowed one run on five hits and struck out a season-high 10 to end a four-game losing streak. He leads the National League with 74 strikeouts. Losing pitcher Kyle Wright (4-3) went 6 2/3 innings and allowed three runs on three hits and two walks, with five strikeouts.

Odubel Herrera had two hits and drove in two runs for the Phillies, and J.T. Realmuto homered and scored twice. Nick Castellanos drove in Philadelphia’s other run. The Braves scored on a wild pitch by Corey Knebel in the ninth, after he relieved Nola.

Cesar Hernandez and Dee Strange-Gordon had two hits each, Patrick Corbin earned his first win of the season, and host Washington beat Colorado.
Yonathan Daza and Elias Diaz had two hits each and German Marquez pitched six innings for the Rockies, who have dropped three of four to start their seven-game road trip.

The Nationals jumped in front with a big first inning. Hernandez led off with a walk, Keibert Ruiz singled and, after Juan Soto lined out, Nelson Cruz singled to drive in Hernandez. Josh Bell followed with a double to bring in Ruiz, and Yadiel Hernandez doubled to make it 4-0.

In winning his third straight start, Cortes (4-1) gave up a first-inning single and then retired 14 straight before Isiah Kiner-Falefa’s throwing error opened the sixth inning. Cortes allowed one run, struck out five and walked one.

Judge (1-for-3) notched a single, walk, run, two RBIs and a stolen base as the Yankees won their third straight game.

Bobby Witt Jr. hit a two-out RBI double to cap a three-run eighth-inning rally as Kansas City snapped a six-game losing streak with a victory over Minnesota in Minneapolis.

Witt’s hit drove in Whit Merrifield, whose two-run double had tied the game. Josh Staumont (2-1) got the win, and Scott Barlow pitched two scoreless innings for his fifth save of the season. Barlow entered with the bases loaded and no outs in the eighth but escaped the jam.

Adolis Garcia doubled home pinch runner Eli White from first base in the ninth inning and Nathaniel Lowe followed with a two-run home run as Texas beat Oakland to open a four-game series between the American League West rivals.

Jonah Heim singled with one out in the ninth against A’s reliever Lou Trivino. White then replaced Heim and was on the move for second when Garcia slashed a double into the left-field corner.

Winning pitcher Matt Bush (2-1) pitched a scoreless eighth inning. Joe Barlow earned his eighth save of the season and converted his 16th straight going back to 2021. The Rangers have won two straight since dropping three in a row. Trivino (1-3) took the loss as the Athletics had a two-game winning streak snapped.