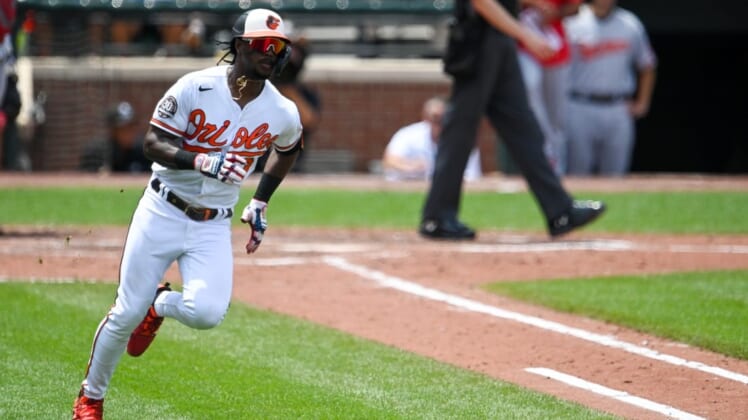 The Baltimore Orioles, who were widely expected to post one of baseball’s worst records at season’s outset, moved within a game of .500 by capping a four-game sweep of the visiting Los Angeles Angels with a 9-5 win on Sunday.

The Orioles have won eight straight games, the first time Baltimore has done that in a single season since April 22-May 1, 2005.

Austin Voth (1-1) allowed two runs on four hits with six strikeouts and no walks in five innings to pick up the win.

Austin Riley drove in his third run of the game with a 12th-inning single to lift Atlanta past visiting Washington, completing a three-game sweep. The Braves won for the sixth time in their last seven games by scoring the only run in the extra innings.

Riley led off the bottom of the eighth with a game-tying home run. With his game-winning single, he joined Dansby Swanson with three hits for the Braves. Six Atlanta pitchers combined on a five-hitter.

Lane Thomas smashed a pinch-hit, three-run home run in the sixth inning to account for Washington’s runs, but his ninth blast of the season couldn’t prevent the Nationals from losing for the 10th time in their last 11 games.

Carlos Santana homered twice, the latter a two-run shot in the eighth inning to take the lead, as host Seattle completed a four-game sweep of Toronto.

The Mariners won their eighth consecutive game to pull even with Toronto for the American League’s third and final wild-card playoff berth.

George Springer, Raimel Tapia and Bo Bichette homered for the Blue Jays, who lost for the ninth time in their past 10 games. Bichette’s solo shot to left-center field in the seventh broke a 4-4 tie.

Billy Hamilton scored the game’s first run in the 10th inning Sunday afternoon as visiting Miami salvaged a split of a four-game series against New York. The Marlins have won eight of 11. The Mets fell to 6-4 this month.

Hamilton, who pinch-ran for Garrett Cooper as the automatic runner at second base to start the 10th, stole third on a 2-1 pitch to Jesus Aguilar and trotted home when the throw from catcher Tomas Nido sailed into left field.

Tanner Scott earned his 12th save with a hitless 10th in which he whiffed Francisco Lindor, the potential winning run, for the final out. Jon Berti had three hits for Miami, while Luis Guillorme singled three times for the Mets.

Freddie Freeman hit a home run among his four hits as the Dodgers won their seventh consecutive game and the 11th of their last 12. Los Angeles also went 10-1 on a season-long 11-game homestand.

P.J. Higgins hit his first-career grand slam and David Bote added a three-run shot for the Cubs, who went 2-5 on their final road trip before the All-Star break.

AJ Pollock grounded a go-ahead, pinch-hit single up the middle with two outs in the eighth inning, and Eloy Jimenez singled home an insurance run one batter later as host Chicago rallied to beat Detroit.

Fighting the sun and wind on a Luis Robert fly ball in the eighth, Tigers left fielder Robbie Grossman committed his first error since June 13, 2018, a span of 440 games that marked the longest errorless streak by a position player in major league history. Robert advanced to second base, setting the stage for Pollock’s RBI after an intentional walk to Jose Abreu.

Javier Baez hit a two-run home run in the first inning for Detroit.

Mike Moustakas drilled his 200th career home run as part of a seven-run outburst in the third inning as Cincinnati routed visiting Tampa Bay to complete a three-game sweep.

The Rays played the game without two of their regulars as both infielder Wander Franco (right wrist) and center fielder Kevin Kiermaier (left hip) were injured Saturday and placed on the injured list before the game..

After recording a season-high 23 hits in Saturday’s 13-1 victory, Cleveland was limited to five hits in the series finale. The Guardians tallied their lone run in the ninth when Owen Miller scored from third on a wild pitch.

Cardinals’ reliever Jordan Hicks (2-4) threw a scoreless eighth inning to earn the victory, and Ryan Helsley closed out the ninth for his seventh save.

The Phillies opened with Nick Nelson as the first of five pitchers. He allowed one run on three hits and a walk in two innings. Jeurys Familia threw a scoreless inning, Cristopher Sanchez allowed two runs on two hits and a walk in three innings, Andrew Bellatti got three outs, and Seranthony Dominguez (4-3) allowed the eighth-inning run to take the loss.

Byron Buxton connected on his 23rd home run of the season in the first inning, Ryan Jeffers also provided power with a blast in the sixth, and Minnesota held off Texas in Arlington, Texas.

Jeffers drove in two, and his seventh home run of the season put the Twins in front for good. Dylan Bundy (5-4) turned in five innings for the Twins, giving up four runs on six hits. Tyler Duffey picked up his second save. Brock Burke (4-2) suffered the loss for the Rangers.

Rangers shortstop Corey Seager homered in all three games of the series, and his opposite-field shot in the eighth inning Sunday was a towering drive that made it a one-run game. Left fielder Gilberto Celestino made a leaping attempt, but the ball popped out of his glove over the wall.

Wood (6-7) held the Padres scoreless on three hits and a walk with eight strikeouts over seven innings. Flores went 4-for-6 with two homers and four RBIs for the Giants. His second homer came off Padres infielder Matthew Batten in the ninth.

Daniel Vogelbach provided the cushion with a three-run homer to help Pittsburgh hang on to beat host Milwaukee in the rubber game of the weekend series.

Vogelbach’s 12th homer, which was the Pirates’ fourth of the game, came in the ninth inning off Chi Chi Gonzalez and extended the lead to 8-4. Andrew McCutchen brought Milwaukee within 8-6 in the bottom half with a two-run homer, his eighth.

Pittsburgh erased a 4-3 deficit with a pair of solo homers off Trevor Gott (1-2), who relieved to start the sixth. Michael Chavis led off with his 10th homer, and two outs later, Oneil Cruz sent a 1-2 pitch 416 feet to center for his fourth homer. Chris Stratton (5-4) recorded two outs in the fifth in relief of starter Jose Quintana.

Garrett Hampson smashed a two-run double off the wall in center field to highlight a three-run seventh inning as Colorado rallied to defeat Arizona in Phoenix.

Connor Joe drove in the winning run with a single as the Rockies took advantage of Josh Rojas’ throwing error to score three unearned runs. Charlie Blackmon finished with two hits as Colorado won a four-game series at Chase Field for the first time in 10 tries in franchise history.

German Marquez (5-7) picked up the win after allowing two runs on three hits and two walks over seven innings. Daniel Bard pitched a 1-2-3 ninth to earn his 18th save. Ketel Marte homered and Rojas had two hits for Arizona. Keynan Middleton (1-2) suffered the loss, allowing three runs, all unearned, on two hits in one inning.

Named a first-time All-Star reserve in an announcement made during the game, Kyle Tucker contributed a home run, his 17th of the season, to Houston’s fifth victory over Oakland in six games this season.