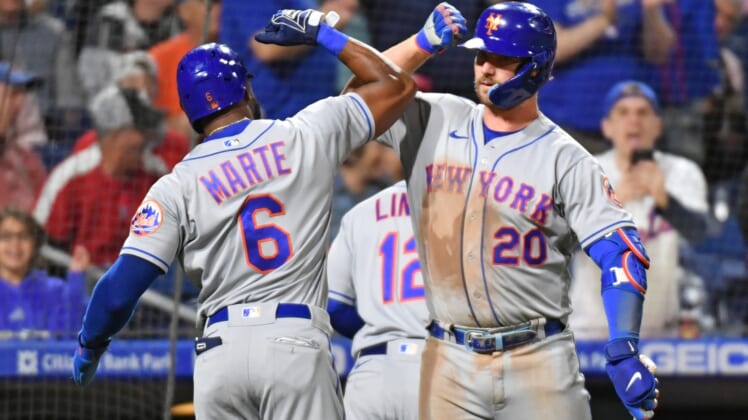 Francisco Lindor and Starling Marte homered and the New York Mets scored seven runs in the ninth inning to rally past the host Philadelphia Phillies 8-7 on Thursday.

Brandon Nimmo ripped a two-run single with two outs in the top of the ninth to tie the game at 7 before Marte delivered the winning RBI double one batter later.

Marte drove in two runs, Lindor added a two-run homer and Pete Alonso and Jeff McNeil had two hits apiece for New York, which had been 0-330 over the past 25 seasons in games in which it trailed by at least six runs in the ninth inning.

Bryce Harper hit a home run and double, knocked in two runs and scored twice for the slumping Phillies, who have lost four in a row. Nick Castellanos homered and drove in three runs and Jean Segura contributed three hits for the Phillies.

Walsh went 2-for-4 with four RBIs and a run scored for the Angels, who claimed the three-game series with back-to-back wins in which they outscored the Red Sox 18-5. Shohei Ohtani (3-2) pitched seven scoreless innings and gave up six hits with 11 strikeouts without a walk. He also went 2-for-4 with an RBI and a run.

The game started as a classic duel between Ohtani and Boston’s Rich Hill, with the latter allowing just one hit and one walk while striking out six over five scoreless frames. It was the 42-year-old lefty’s longest start of the season — the 200th of his career.

Civale (1-2) pitched 5 2/3 innings and allowed four runs, six hits and no walks. He struck out a season-high eight batters in the opener of a four-game set. Emmanuel Clase earned his fifth save with a perfect ninth. Rookie Steven Kwan hit his first career home run.

Kyle Tucker delivered a walk-off single in the ninth inning and Houston Astros claimed the opener of a four-game series with visiting Detroit. The Astros have won four consecutive games while the Tigers fell for the third time in four games.

Trailing 2-0 with two outs in the top of the ninth, the Tigers rallied behind Miguel Cabrera’s single and Jeimer Candelario’s home run. The tying blast came off Astros closer Ryan Pressly, who had missed the previous 19 games due to right knee inflammation.

Pressly (1-1) emerged as the winner despite allowing the two runs in his lone inning. Gregory Soto (1-2) took the loss.

It was the eighth win in nine games for the Brewers, who clubbed five home runs off Cincinnati rookie starter Hunter Greene. Christian Yelich homered as part of a three-hit game for the National League Central leaders, who outscored the Reds 34-12 in the series.

Tyler Stephenson homered and singled for the Reds, who lost their ninth straight and were swept in an entire road trip for a second consecutive time. The Reds have dropped 20 of their past 21 games. The loss was Cincinnati’s 13th straight on the road, its longest such skid since dropping 19 straight between July 5-Aug. 24, 1933.

Austin Hays broke a tie with a one-out homer in the eighth inning, and Mountcastle followed with his second blast of the game. Cedric Mullins and Jorge Mateo also homered for the Orioles. Mountcastle doubled his home run total for the season as he now has four.

Jorge Lopez (3-1) earned the win by logging the last 1 1/3 innings. Byron Buxton homered and knocked in three runs for the Twins, who had won 11 of 12 games before losing to the Orioles on consecutive nights.

Behind the three long balls, the Rockies took two of three games in the series. The ball was carrying to all fields at Coors Field, with the teams combining for five home runs and 25 hits. The difference was that two of Colorado’s homers came with runners on base, compared to solo shots by Juan Soto and Keibert Ruiz for Washington.

Grichuk’s opposite-field home run in the seventh inning gave the Rockies some insurance. Cesar Hernandez, who extended his hit streak to 11 games, had an RBI groundout in the eighth for the Nationals.